SEOUL, July 21 (Yonhap) -- The management of the scandal-ridden hedge fund Optimus was convicted Tuesday of running a vast fund fraud scheme that consumed hundreds of billions of dollars of its investors' money.

Its CEO, Kim Jae-hyun, was given a 25-year prison term for fraud, embezzlement and other criminal charges, and two other executives were sentenced to eight years in prison for colluding with Kim to deceive thousands of people.

However, many questions still remain unanswered about the lobbying allegations involving politicians and high-ranking public officials and how the victims can recover their money.

The problem brewing inside the hedge fund reared its ugly head in June last year when it failed to meet redemption demands from customers.

Investigators found out that the company defrauded customers into believing that their money would be invested in safe public institutions, but it, in fact, funneled most of the money into risky assets or used them to pay returns to investors to give the appearance that the company was engaged in serious and sound financial transactions.

Of the total funds, the company failed to redeem more than 554 billion won for its customers, the investigators said. 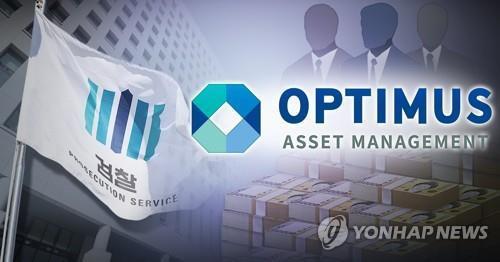 While the investigation was going on, the scandal began to spill into the political and financial sectors after one of the company's internal documents was disclosed to the media, suggesting that some powerful individuals allegedly lobbied to help the company conceal its fraudulent activities.

The document was drafted in May last year to prepare for a possible investigation by the Financial Supervisory Service (FSS), a month before the company revealed that it could not return the investors' money.

The document specifically named such influential figures as Lee Hun-jai, a former finance minister, Chae Dong-wook, a former prosecutor general, and Yang Ho, former chairman of Nara Bank, as the company's core advisers who, according to the document, "spared no effort to help normalize the company."

Some of them were grilled by investigators earlier this year for their possible role in concealing the company's illegalities. But they maintained that they provided legal counseling, and prosecutors have found no evidence so far to connect them to the company's shady activities.

The document also warned that there was a risk of "misleading" people to believe that the company would use its powerful "helpers" to buy its way out of problems if and when an official investigation started over its fund products. 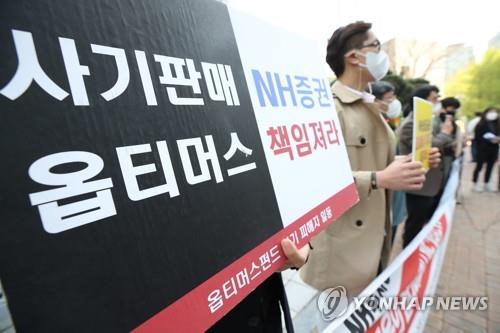 Another bizarre turn came in December, when an aide to former Prime Minister Lee Nak-yon, one of the leading liberal presidential hopefuls, killed himself while under probe for an alleged breach of the political fund law.

He and another staff member of Lee's election campaign prior to the April 15 parliamentary elections were suspected of receiving 115,000 won (US$105) per month between February and May last year from Trust All, a company believed to be related to the Optimus fraud scandal. The money was for the payment of a rental fee for a multifunction printer at Lee's campaign office.

It is still unclear why the aide made such a fatal decision over such a small amount of money.

Another influential figure implicated in the case is presidential front-runner Yoon Seok-youl, a former top prosecutor. He is currently under probe by the Corruption Investigation Office for High-ranking Officials (CIO) on suspicions that he abused his power to deter an investigation into Optimus.

During the sentencing trial Tuesday, Judge Hur Sun-ah said Kim "totally ignored the basic work ethics and principles of the financial market, such as keeping faith with investors," and caused them "astronomical damage."

She also reprimanded the three defendants for going "as far as generating fraudulent documents for investors" in order to sustain the fraud and impeding investigations by trying to destroy evidence.

"It is unclear how much money the victims can recover," she said, adding that "it will take a long time and resources for them to recover, if at all, from the damage."

Both the prosecution and the defendants are expected to appeal the ruling. The prosecutors had demanded Kim get life imprisonment for "exploiting ordinary people's humble dreams of making a small return out of a safe investment."