SEOUL, July 22 (Yonhap) -- Gyeonggi Province Gov. Lee Jae-myung, the front-running presidential contender for the ruling Democratic Party, made a campaign pledge Thursday to distribute universal basic income of up to 2 million won (US$1,736) per year to all citizens.

"Within the (five-year) term of the next administration, (I) will provide 2 million won in basic income to each young person every year and 1 million won each to the rest of the citizens" Lee said in a press conference at the National Assembly in Seoul.

"The end goal would be paying 500,000 won per month, the equivalent to what is paid to those in the bottom income bracket currently, but it will be (practically) impossible to achieve the level within the term due to financial conditions," Lee noted.

Under the road map laid out by Lee, the first basic income of 250,000 won per person, in the format of expirable provincial currencies, will be distributed in 2023 and the payment will be expanded by up to four times before the end of the five-year presidential term.

To some 7 million young people aged between 19 and 29, an additional yearly basic income of 1 million won will be paid, he noted.

To that end, a budget of some 50 trillion won would be sourced by rearranging budget spending and priorities, rolling back tax discounts and adopting other austerity measures, the governor said. He also plans to introduce new taxes on land holdings and carbon emissions to bankroll the basic income payment.

"By installing a presidential committee on basic income, I will win support (from the public) before designing and implementing the basic income scheme in stages," he said.

The Gyeonggi governor has been at the forefront of the country's growing debate on basic income, anchored on the idea of providing a government-ensured income enough to meet citizens' basic material needs against the backdrop of increasing job displacements in the era of the fourth industrial revolution. 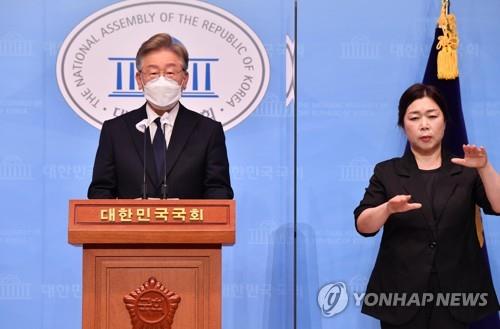