SEOUL, July 22 (Yonhap) -- Rescue authorities searching for a South Korean mountaineer who went missing in the Himalayas earlier this week have captured a signal from his satellite phone within the Chinese territory, informed officials here said Thursday.

Kim Hong-bin, who lost all of his fingers to frostbite about 30 years ago, reached the summit of the 8,047-meter-high Broad Peak located in the Karakoram Range on the Pakistani-Chinese border Sunday, ascending all 14 eight-thousanders in the Himalayas for the first time in the world as a disabled person.

But Kim went missing at a location about 7,900 meters above sea level during his descent. Nearby climbers from Russia spotted Kim the following day but failed to rescue him as a rope broke. He reportedly fell further down. 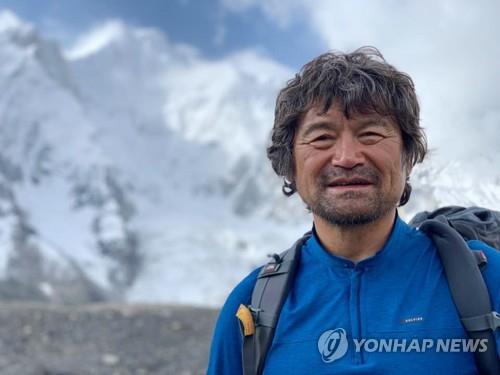 According to the officials, local rescue authorities picked up a signal from Kim's satellite phone at a location about 7,000 meters above sea level and 9 kilometers southeast of the 8,611-meter-high K2 mountain at 10:37 a.m. Monday (local time). They have also identified the detailed latitude and longitude of the presumed location of Kim's satellite phone. Kim is presumed to have fallen off a cliff on the Chinese side of Broad Peak, which is about 8 km from K2.

They said search and rescue have been very difficult, as the presumed location is an ice wall with an inclination of 80 degrees.

Moreover, rescue helicopters have yet to approach the presumed location due to very bad weather conditions, they noted.

Kim lost all 10 of his fingers due to frostbite while climbing up the 6,194-meter-high Mount McKinley, the tallest mountain in North America, in 1991. But he overcame his disability with an indomitable will and a fighting spirit to become the world's first disabled person to conquer the highest mountains on the seven continents.