WASHINGTON, July 22 (Yonhap) -- The United States and China may share similar interests when it comes to the issue of denuclearizing North Korea despite their sometimes competitive and even adversarial relationship, a State Department spokesman said Thursday.

Ned Price made the remarks as Deputy Secretary of State Wendy Sherman is set to visit China for discussions on issues that will include ways to rein in Pyongyang's nuclear and provocative ballistic missile programs.

"The DPRK is one of those areas where there is at least some alignment of interests, and so we think that there is room for, at the very least, discussion with the PRC when it comes to the challenge posed by the DPRK's nuclear and ballistic missile programs and its other threatening activity," the spokesman said, referring to North Korea and China by their official names, the Democratic People's Republic of Korea and the People's Republic of China. 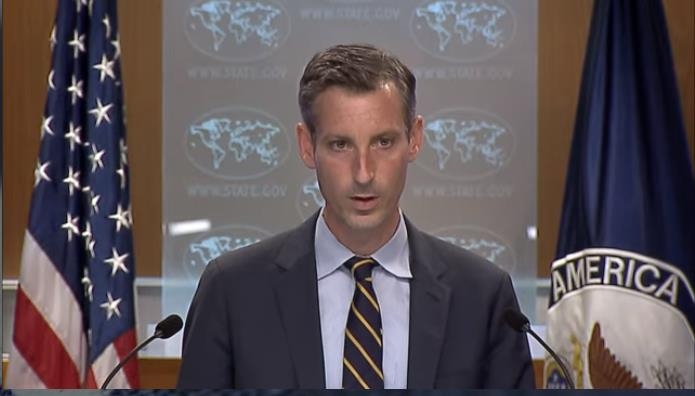 The North has stayed away from talks since early 2019, while it remains unresponsive to a number of overtures made by the Joe Biden administration since it took office in January.

"As you know Deputy Secretary Sherman will be in the PRC this weekend," said Price. "She will take part in high level meetings there. I would expect that the totality of that relationship, the competitive elements, the adversarial elements, but also the potentially cooperative elements will be on that agenda."

The spokesman also emphasized the need to work with U.S. allies and partners in ridding North Korea of its nuclear ambitions.

"One of the most important tools we have is the unprecedented system of alliances and partnerships that we have around the world," he said.

"We have invested heavily, and we will continue to invest heavily in these alliances, in these partnerships, including and especially in the Indo-Pacific, knowing that we have any number of shared values, and we have any number of shared interests, and the denuclearization of the Korean Peninsula, a diminution of the threat posed by the DPRK and its nuclear, its ballistic missile programs, that is a shared interest across the region, and it's something we'll continue to pursue," added Price.

He said the U.S. will also continue to seek to improve human rights and humanitarian conditions in the impoverished North, while noting, when asked, that his country currently does not have any plans to share its COVID-19 vaccines with the North.

"And ultimately, our policy goal, a policy goal of our DPRK policy review is to not only seek to secure our interests but also to uphold our values, and that is ultimately part and parcel of the reason why we seek to improve the humanitarian conditions for the people in North Korea. We'll continue to look at ways to do that, consistent with what we're able to do and what's appropriate."