The country added 1,630 COVID-19 cases, including 1,574 local infections, raising the total caseload to 185,733, according to the Korea Disease Control and Prevention Agency (KDCA).

The latest figure was down from a record high of 1,842 on Thursday when 270 patients from a virus-hit Cheonghae naval unit were counted as imported cases.

The daily caseload has remained above the 1,000 threshold since July 7 due to the resurgence in the greater Seoul area, and the coronavirus has been spreading across the nation with increased activities in the summer season and the fast rise of the highly contagious delta variant. 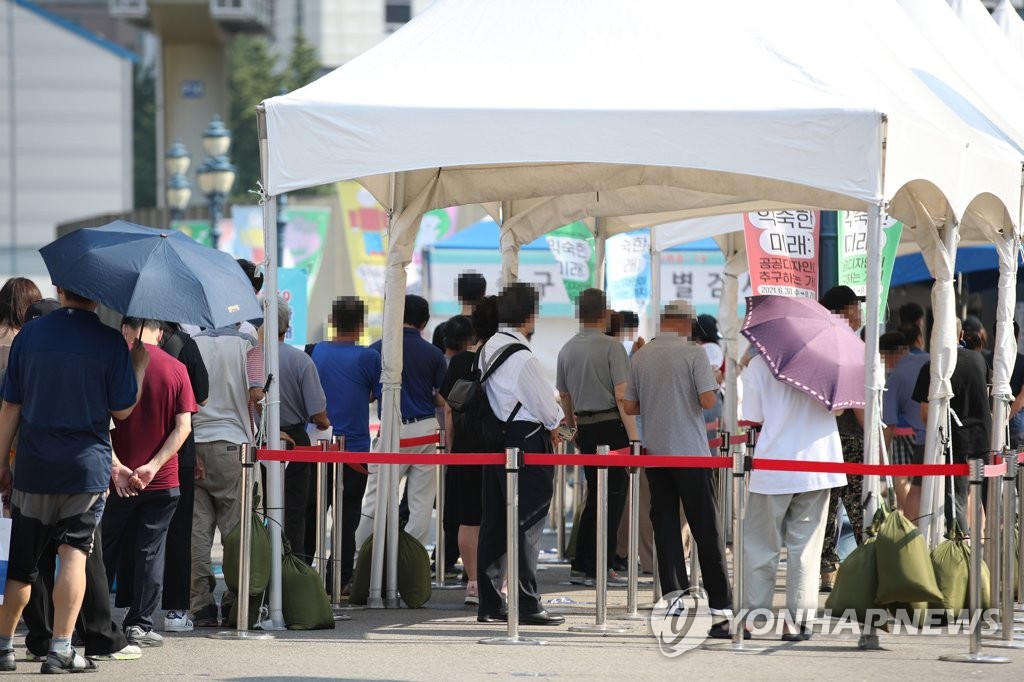 Later in the day, health authorities and local governments said 1,483 new cases were confirmed from 12 a.m. to 9 p.m. Friday, 24 fewer than at the same time the previous day.

The nation is in an uphill battle against the worst wave of the pandemic with a rising proportion of patients in their 20s, 30s and 40s whose transmission routes are unknown as the vaccination rollout has mostly focused on the elderly population, medical staff and social service workers.

Earlier in the day, the government extended the highest level of the four-tier distancing measures in the Seoul metropolitan area, the virus epicenter, for another two weeks beginning Monday until Aug. 8.

The semi-lockdown measures ban gatherings of more than two people after 6 p.m., place a 10 p.m. curfew on restaurants and cafes, and ban on nightclubs and other entertainment venues.

The government said it will tighten regulations on sports games and exhibitions while partly easing rules on funerals and weddings to allow up to 49 people to attend the events.

Interior Minister Jeon Hae-cheol said the government decided to extend the stringent virus measures due to a sharp rise in new cases across the nation.

"To put a brake on virus transmissions, we have no other option but to reduce private gatherings and movement," Jeon said during a pan-government meeting on the COVID-19 response.

The government said the tough restrictions are aimed at lowering the number of new daily cases below 1,000 in the greater Seoul area, saying it is mulling even stronger virus measures unless the virus curve flattens within the next two weeks. 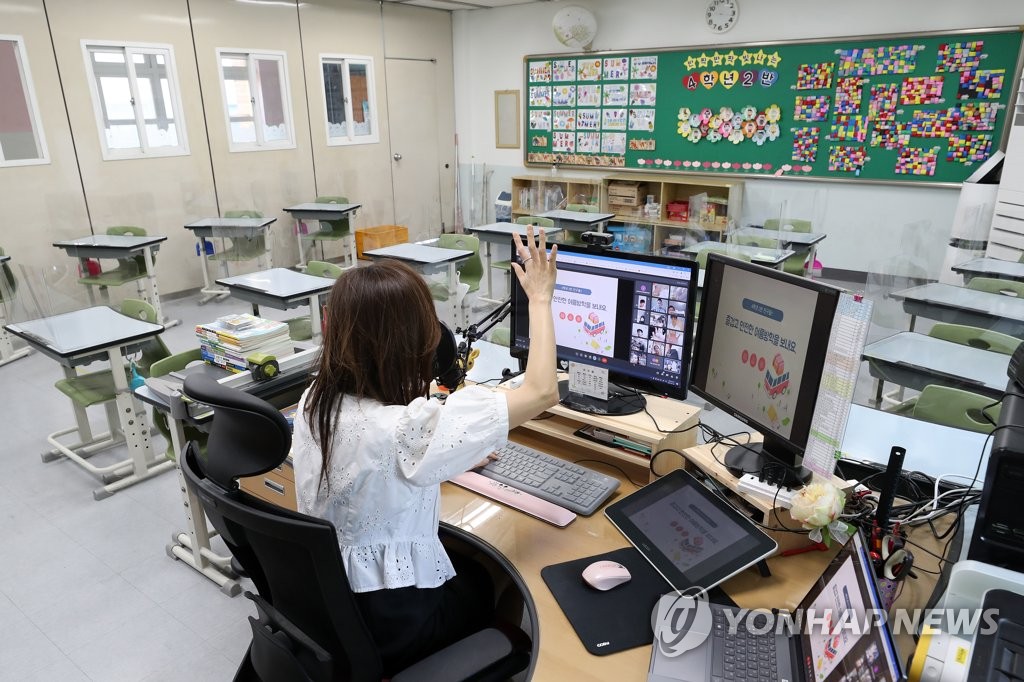 The non-capital area has also witnessed rising infections over the past week to account for over 30 percent of the total, prompting authorities to limit gatherings of more than four people across the nation.

Authorities expressed concerns over the highly contagious delta variant, which has fast become the nation's dominant variant by taking up 76 percent of 1,255 locally transmitted variant cases over the past week.

To prevent the entry of variant cases from abroad, the KDCA said it has added four more nations to the list of "high-risk nations," including Nepal and Russia, raising the total to 26 countries.

Under the rules, foreign arrivals from the high-risk nations will have to undergo a two-week quarantine even if they are fully vaccinated, it noted.

The government said a COVID-19 response team has been monitoring quarantine measures for Korean athletes and officials who are staying in Japan for the Tokyo Olympics, which formally kicks off Friday night with the opening ceremony.

South Korea is sending a 354-member contingent to Tokyo that includes 232 athletes competing in 29 events.

"We have dispatched inspectors to the athlete village to monitor quarantine situations in real time and support antivirus protection for athletes," Kwon Jun-wook, head of the Korean National Institute of Health, said in a briefing.

The government also urged a major umbrella labor group to scrap its plan to stage rallies in Wonju, about 140 kilometers east Seoul, on concerns of potential infections from the gatherings.

The Korean Confederation of Trade Unions (KCTU) said about 1,000 members will go ahead with the protest in the city later in the day to support a walkout of unionized workers of the National Health Insurance Service's call center.

The KCTU said it will divide the participants into smaller groups to comply with the Level 2 social distancing guidelines in Gangwon Province, but authorities have warned of strong actions against those who violate virus rules.

The umbrella union has come under criticism for holding a massive rally in downtown Seoul on July 3 with about 8,000 attendants despite government's repeated warnings. Police have booked 23 KCTU members for allegedly violating quarantine regulations during the rally. 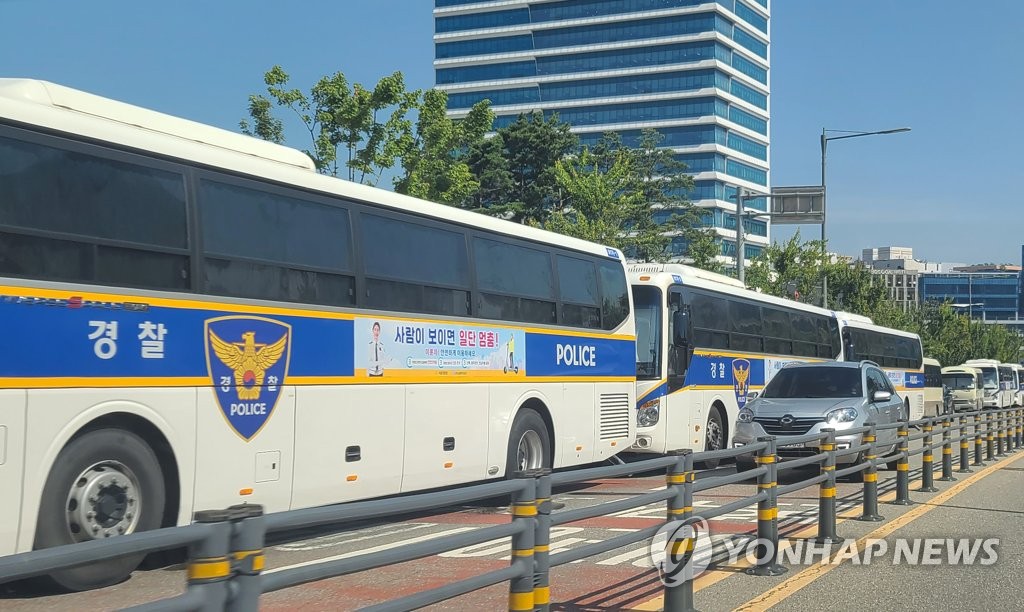 A total of 1.66 million people, or 32.6 percent of the country's population, have received their first shots of COVID-19 vaccines, and 6.7 million people have been fully vaccinated, the KDCA said.

Of the newly confirmed domestic cases, 516 were from Seoul, 403 from the surrounding Gyeonggi Province and 90 from the western port city of Incheon.

The southeastern port city of Busan and the surrounding South Gyeongsang Province reported 115 and 93, respectively, as more people tested positive after going to bars and other entertainment venues.

There were 43 imported cases, with 10 from Uzbekistan and nine from Kazakhstan.

The total number of people released from quarantine after making full recoveries was 164,206, up 1,133 from a day earlier.

The number of patients in critical condition came to 227, up nine from the previous day.