"The top priority issue of this year's national policy is successful farming," the Rodong Sinmun, the organ of the country's ruling Workers' Party, said in an editorial.

"All citizens living in this country should provide every possible support while regarding good farming as a life-or-death matter that determines the fate of themselves and their children as well as that of their country," it added.

Saying that farming has been carried out as planned so far, the paper warned that typhoons and flooding, which devastated the country's major rice-producing areas last summer, could hit the country this year too.

"The guard cannot be lowered at any moment with regard to farming," the paper said. "Given the lessons learned from last year and in light of the importance of this year's farming, support for the agriculture sector should be provided ceaselessly until work is completed."

North Korea is known for chronic food shortages, which appear to have been aggravated by last summer's back-to-back typhoons and flooding that wrought havoc on key farming areas. In June, North Korean leader Kim Jong-un acknowledged that the country is facing a "tense" food shortage.

In a report recently submitted to the United Nations, North Korea said that its production dropped to the lowest level in 10 years in 2018 due to natural disasters, lack of farming materials and low levels of mechanization. It also admitted having failed to achieve its national target of producing 7 million tons of food.

Experts say that North Korea needs to produce around 5.5 million tons of food every year to feed its population. A think tank in Seoul earlier said the North could face a food shortage of around 1.3 million tons this year. 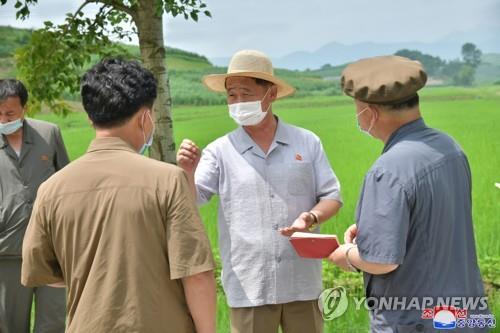