SEOUL, July 23 (Yonhap) -- A Seoul court on Friday ruled against an American composer in a plagiarism suit he brought against the producer of the popular South Korean children's song "Baby Shark" two years ago. 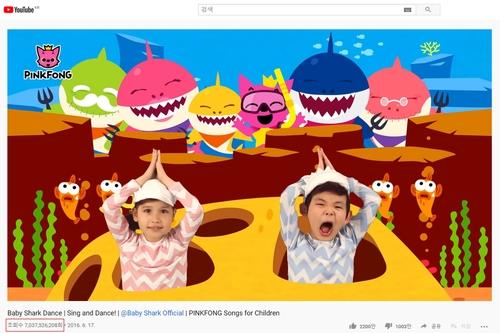 The rhythmic two-minute song featuring a shark family and their underwater hunt for small fish has gone viral in cyberspace and on the small screen at home and abroad. "Baby Shark Dance," a sing-and-dance video for the megahit children's song, has racked up more than 9 billion views on YouTube.

Only, whose legal name is Jonathan Wright, filed a lawsuit with the Seoul court in March 2019, claiming that the South Korean song plagiarized his own song "Baby Shark" remade in 2011 with a unique rhythm to an orally transmitted folk song.

But SmartStudy has rejected the plagiarism claim, saying its song was a recreation of a traditional North American children's song that has no valid copyrights.

Only's side last month expressed an intention to withdraw its lawsuit through its lawyer here. But SmartStudy disagreed. A local court has to reach a verdict if the plaintiff declares an intent to drop the case, but the defendant does not agree.

"The Korea Copyright Commission asked to review the case said it is difficult to acknowledge that the plaintiff's song added a new creative element to the traditional song," the court said.