SEOUL, July 23 (Yonhap) -- In the late 1980s, Africa was a big diplomatic battleground between South and North Korea.

While the world was divided into two groups of capitalism and communism, the African continent with about 50 nations, known as the third world, was considered to have the casting vote at a United Nations General Assembly.

The upcoming local action movie "Escape from Mogadishu," based on a true story, is set in the African country of Somalia at the end of 1990, when the two Koreas were competing for membership in the United Nations.

There, diplomats from the two Koreas make desperate efforts to ask the Somali government to vote for their own countries on a possible General Assembly ballot for new members. 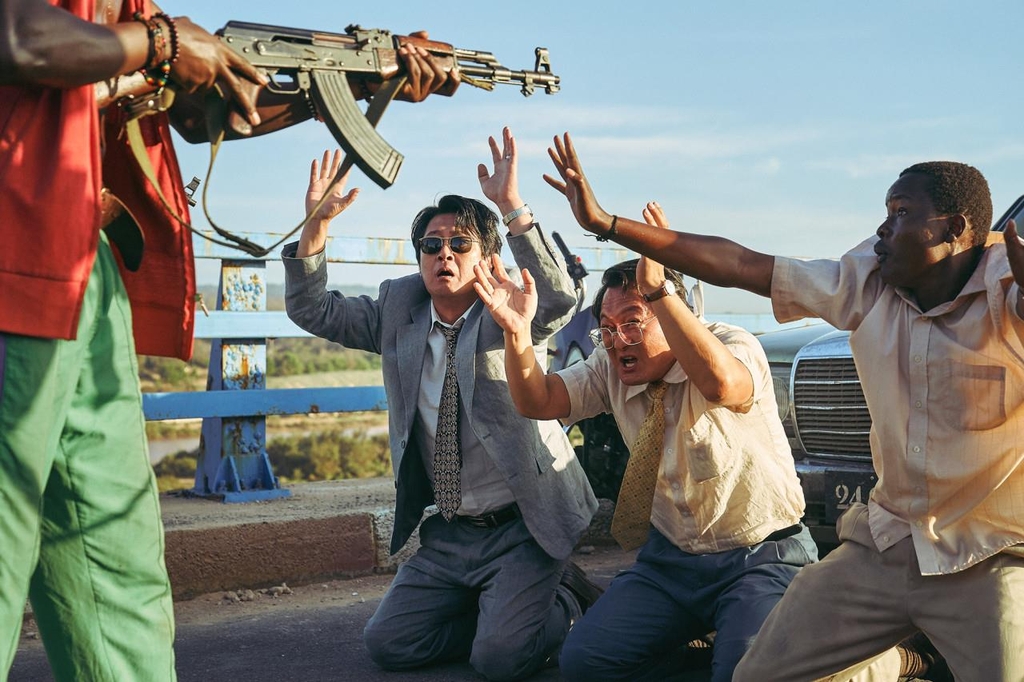 South Korean Ambassador Han Shin-sung (Kim Yun-seok) is in high spirits on his way to a long-awaited meeting with the Somali president. He anticipates a promotion after returning to Seoul as he is confident of winning Somalia over South Korea's side and help his country join the UN.

But his dream is shattered by a sudden armed robbery attack. His request to meet the president is refused because he arrives at the presidential office too late.

At that time, he catches a glimpse of North Korean Ambassador Lim Yong-su (Huh Joon-ho), who is talking with the Somali president. North Korea, which has maintained close relationships with Africa for decades, is always ahead of its South rival thanks to its superior intelligent network.

With the cat-and-mouse diplomatic competition between the two sides escalating further, the fate of the Somali government becomes unclear as a rebellion breaks out in the capital city and the entire communications network is cut off. 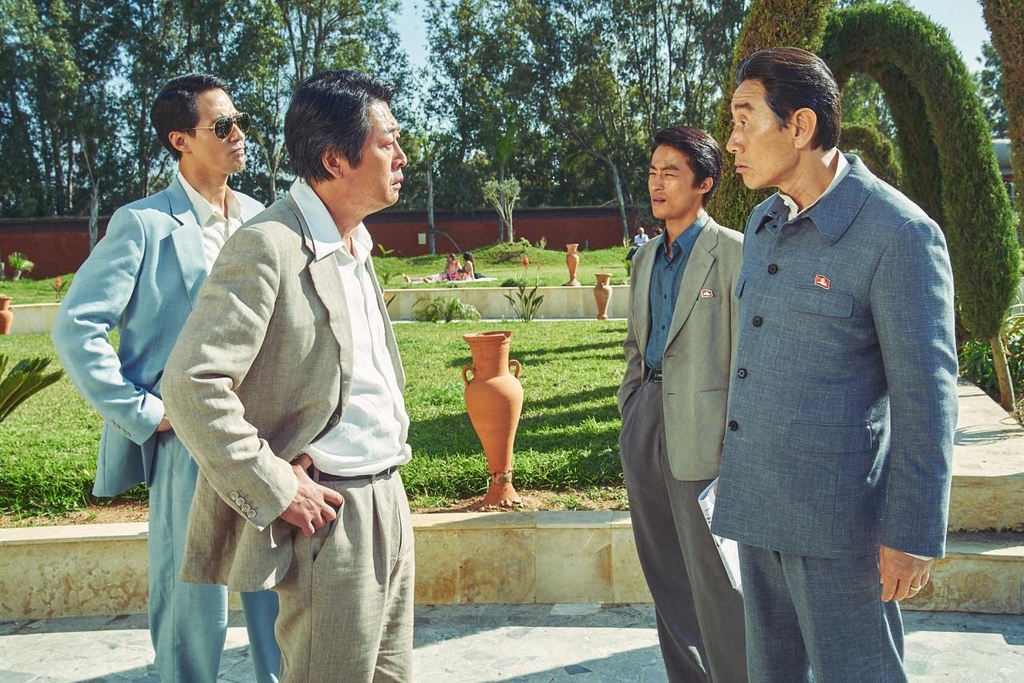 While rioters attack the North Korea Embassy in protest against the Somali government, Lim abandons his mission and asks for help in the state of emergency to the South Korean Embassy, which is guarded by armed police, as a last resort.

Upon advice by spy agent Kang Dae-jin (Jo In-sung) to persuade the stranded North Koreans to defect to the South, Han reluctantly accepts the North Korean people and lets them stay together at the mission.

Their unexpectedly sudden co-habitation is not as nice and simple as occasional quarrels and fights break out between officials from both sides.

But they have to end their altercations as the Somali police leave the South Korean mission, which is now exposed to the armed insurgents and falls into grave danger.

From this point on, South and North Korean people forget their nationality and ideology, and think of the same goal: run for their life and get to the Italian Embassy, where they can catch a rescue plane. 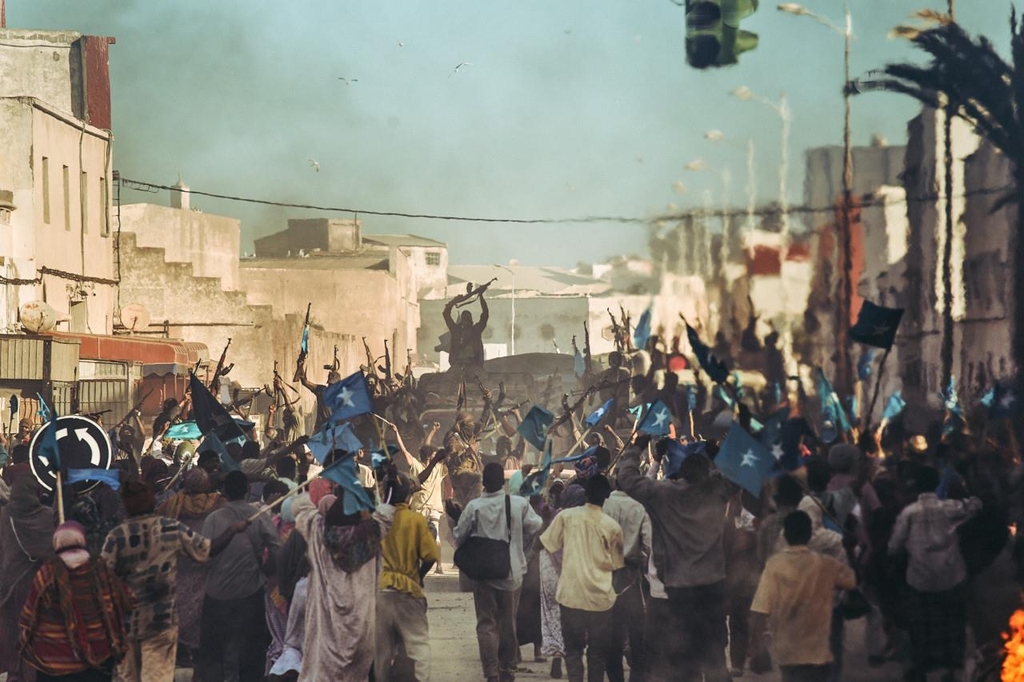 The climax of "Mogadishu" starts here as four cars bulletproofed with books and sandbags fly down the war-torn streets of Mogadishu under a storm of bullets.

The deafening sound of heavy-caliber gunfire, car crashes and tire skids echoing throughout the downtown creates a tense and violent atmosphere as if life and death of the two Koreas is at stake there.

Director Ryoo Seung-wan, who gained popularity for his kinetic and intense action films like "The Unjust" (2010) and "The Berlin File" (2013), exerts his ability again to build up emotional tensions among characters and feature dynamic action scenes in 121 minutes.

The ensemble of the cast led by veteran actors Kim Yun-seok and Huh Joon-ho helps the story look more realistic, as their humorous dialogues does not seem awkward in the life-or-death situation and in the tragedy of the civil war.

The unexpected cooperation between South and North Koreans in a third country might be a corny and formulaic plot often seen in many Korean movies.

But director Ryoo does not fall into the melodramatic conclusion where the protagonists become close friends but have to say a tearful goodbye in the end. He keeps a moderate distance from an emotional approach to the inter-Korean relationships. 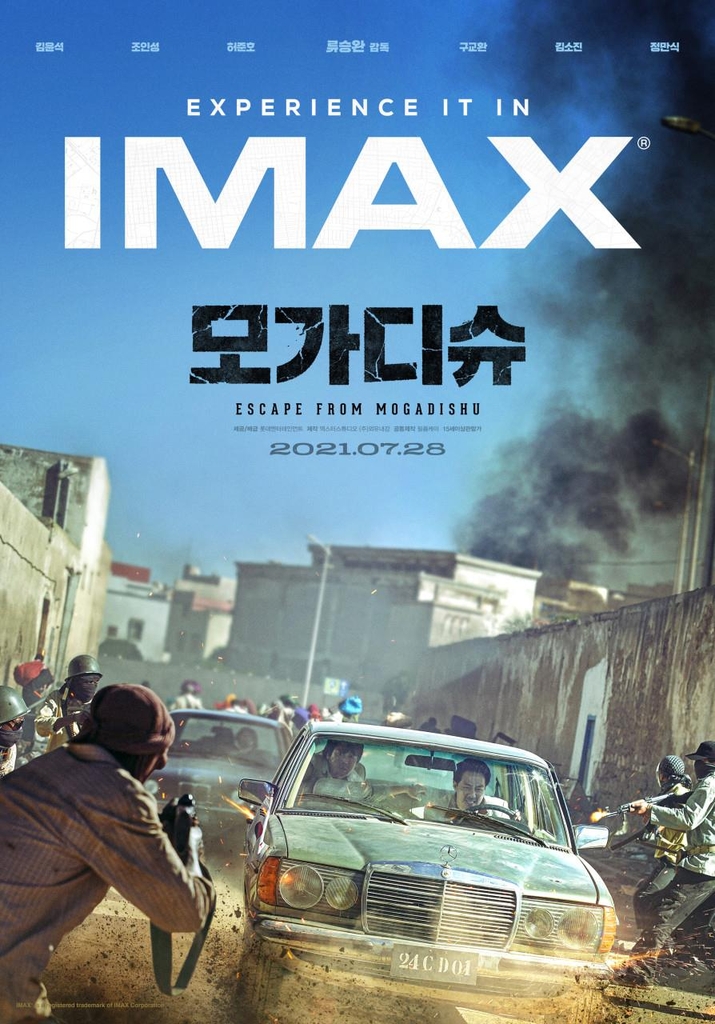