SEOUL, July 24 (Yonhap) -- South Korea's daily new coronavirus cases remained above 1,600 Saturday, as the authorities struggled to stem the fourth wave of COVID-19 with the extension of the toughest virus curbs in the greater Seoul area.

The country added 1,629 COVID-19 cases, including 1,573 local infections, raising the total caseload to 187,362, according to the Korea Disease Control and Prevention Agency (KDCA).

The latest tally was down from 1,630 on Friday and a record high of 1,842 on Thursday, when 270 infected members of the 301-strong Cheonghae Unit on an anti-piracy mission off Africa were counted.

The daily caseload has remained above 1,000 since July 7 due to the resurgence in the greater Seoul area and the spread of the virus in other regions attributable to increased activities in the summer vacation season and the highly transmissible delta variant.

Later in the day, health authorities and local governments said 1,234 new cases were confirmed from 12 a.m. to 6 p.m. Saturday, 80 fewer than at the same time the previous day. More than 63 percent of the newly added cases were from the greater Seoul area. 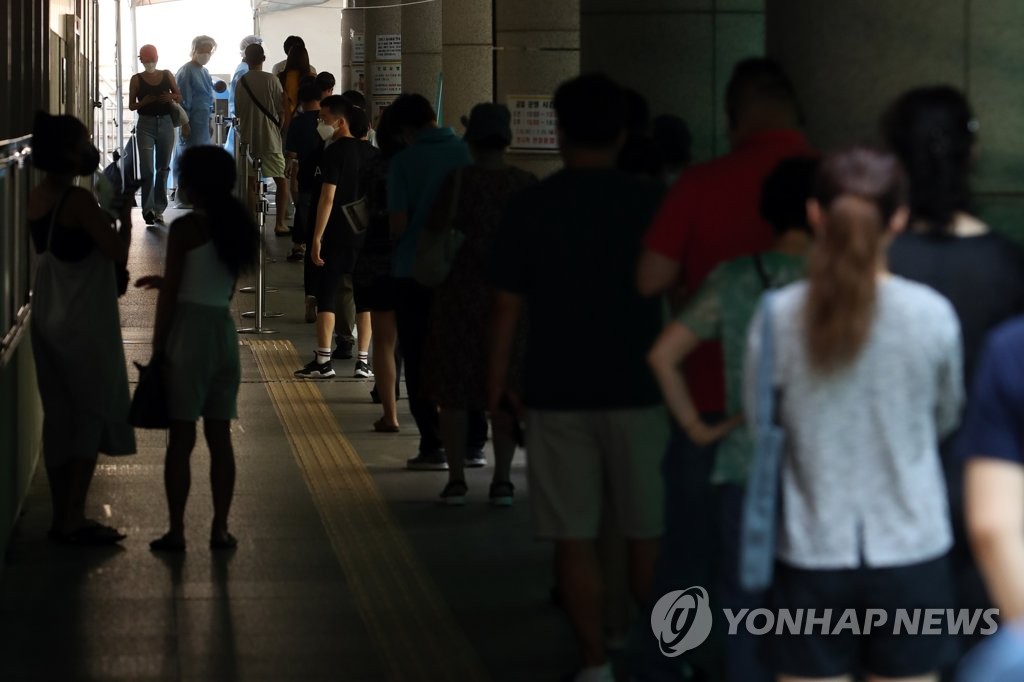 South Korea has been scrambling to curb rising infections particularly among those in their 20s, 30s and 40s, as transmission routes involving the age groups are unknown in many cases with the vaccination campaign focusing largely on the elderly population and medical and social service workers.

On Friday, the government extended the highest level of the four-tier distancing measures in the Seoul metropolitan area for another two weeks beginning Monday until Aug. 8. It also plans to discuss the strengthening of virus curbs in the non-Seoul metropolitan regions on Sunday.

The continued increase in infections outside the wider Seoul area has been emerging as a major concern for the health authorities, a reason why they are mulling tougher restrictions for provincial areas.

Of the new infections, 582, or 37 percent, were reported from outside the Seoul metropolitan area. The figure, the highest in the ongoing fourth wave of the pandemic, was up from 565 posted Friday.

In the latest tally, 462 cases were from Seoul, 448 from the surrounding Gyeonggi Province, 81 from Incheon, 114 from the southeastern port city of Busan and 111 from South Gyeongsang Province.

A total of 16.8 million people, or 32.8 percent of the country's population, have received their first shots of COVID-19 vaccines, and more than 6.8 million people have been fully vaccinated, the KDCA said.

From Wednesday to Friday, the number of cases of potential side effects reported among people vaccinated came to 2,241, according to health authorities. Of the total, 2,149 involved mild symptoms, such as headache and muscle pain.

Among those who reported side effects, six people -- all older than 70 -- died. The authorities have yet to find any correlation between their vaccinations and deaths.

There were 56 imported cases, including 47 from Asia, excluding China. Of the total, 21 are South Koreans.

The total number of people released from quarantine after making full recoveries was 165,246, up 1,040 from a day earlier.

The number of patients in critical condition came to 254, up 27 from the previous day.

(3rd LD) New cases above 1,600 amid stepped-up fight against 4th wave of pandemic

(3rd LD) New cases above 1,600 amid stepped-up fight against 4th wave of pandemic