The 17-year-old archer from South Korea teamed up with An San for the inaugural Olympic gold in the mixed team event in Tokyo on Saturday, about 24 hours after declaring his goal of winning three medals here. They beat the Dutch tandem of Gabriela Schloesser and Steve Wijler by the set score of 5-3. 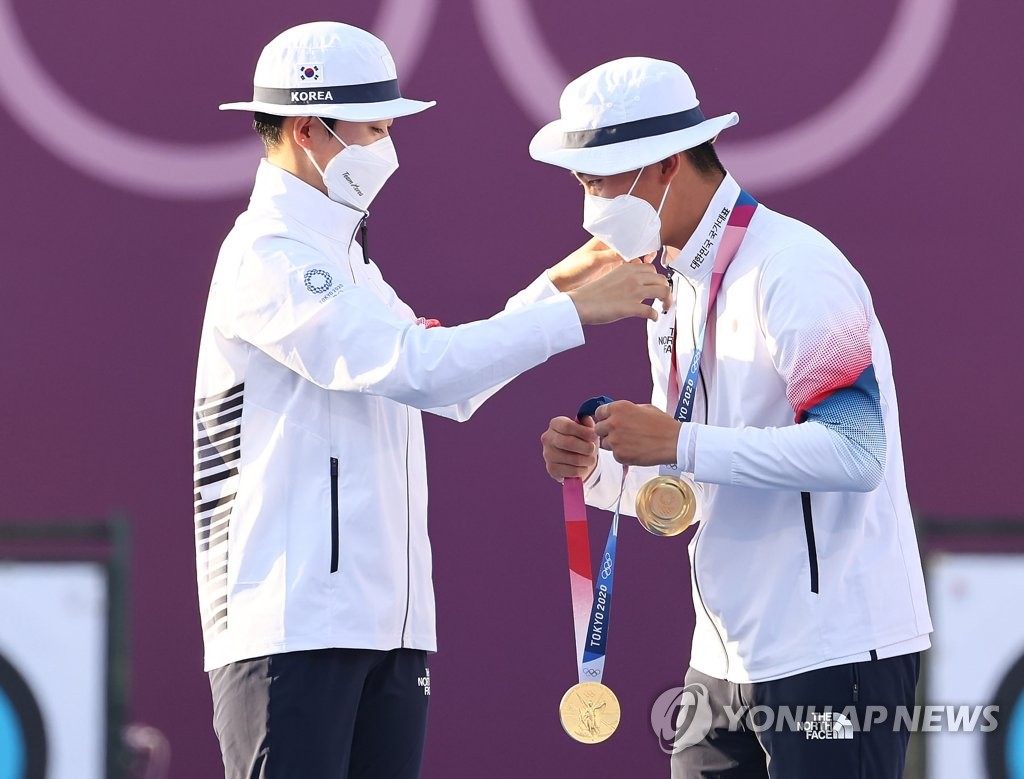 Kim earned the chance to represent the country in the mixed event by winning the individual ranking round on Friday. He didn't specify the color of the medals he wanted to win that day, but it was clear from the tone of his voice and the confident look on his face, barely concealed by the mask, that Kim wanted nothing less than gold.

It could have been dismissed as needlessly brash comments from a teenager who had no idea what he was getting himself into. After all, this was Kim's first Olympics. What could he possibly have known about the pressure cooker of the Olympics?

If Kim's performance Saturday is to be any indication, maybe experience is overrated.

In the semifinals against Mexico, Kim hit 10 with his final four arrows. He had three more in the final, never once hitting anything less than a 9 in the last two matches.

The fiery Kim kept shouting words of encouragement, both to himself and to An, before and between their shots.

"I think everyone in the Olympics must have felt some sort of pressure, and it really came down to who could overcome that fast and compete with confidence," Kim said. "I have the team and the individual events left. And I'll have the same mindset for them, too." 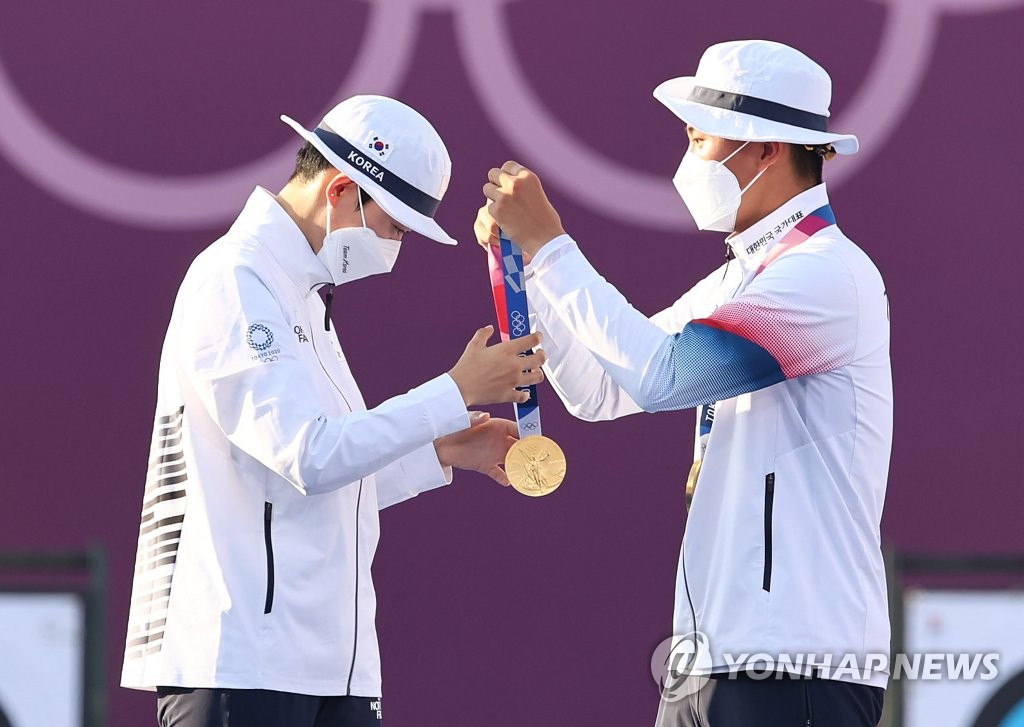 In comparison, An San sounded as though she didn't think she belonged at the top of the ranking round on Friday, despite setting an Olympic record score with 680 points.

An repeatedly said she would just concentrate on giving her best effort and letting the rest take care of itself. It might have been An's way of deflecting pressure. She certainly didn't look out of place in the run to the gold medal on Saturday.

An hit a couple of 8s in the final, but took advantage of an opening given by Wijler's disastrous 6 in the third set.

It was An's final 9 that clinched the gold medal for South Korea.

Whenever Kim let out his primal screams, An almost sheepishly offered her own words. She said Kim's action did positively impact her performance, saying, "He helped me relax and fight off jitters." 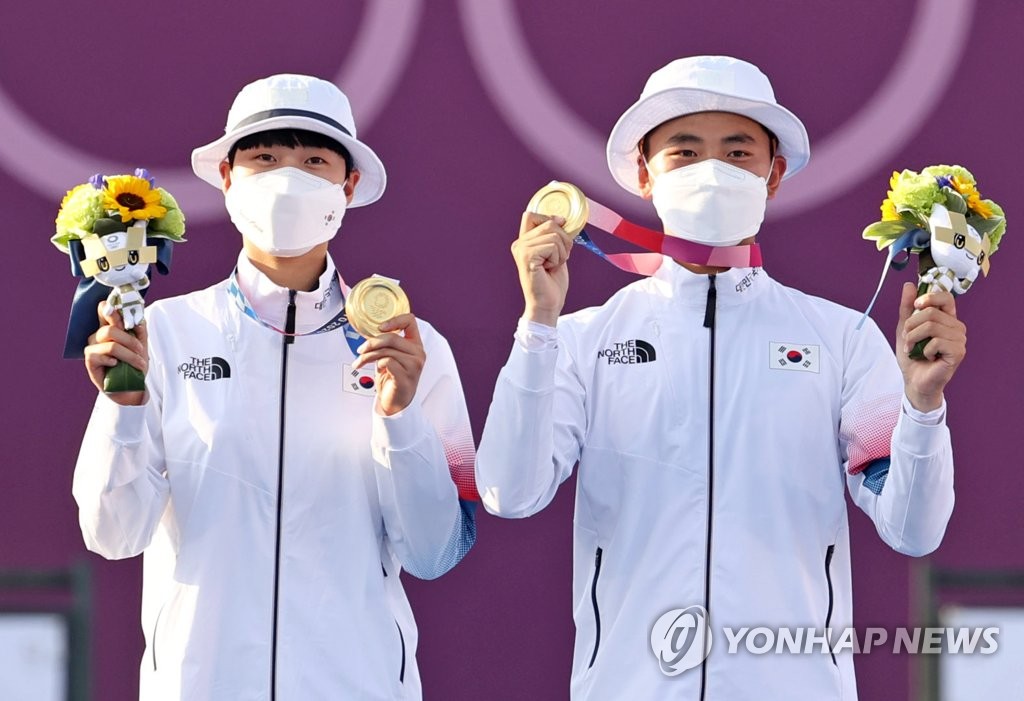 Kim and An seemed to make an odd couple, given their contrasting personalities. But they shared a neat moment during the medal ceremony.

Because of COVID-19 protocols, athletes now have to put medals around their own necks. And just before their prizes were delivered to them, An and Kim decided to give each other the gold medals.

Much has been made about the depth of the archery talent pool in South Korea, and it's become a cliche to say making the South Korean Olympic team is more difficult than winning an Olympic medal.

An even said she doesn't know if she'll make the national team for the 2024 Paris Olympics, adding she certainly hoped to have that opportunity. 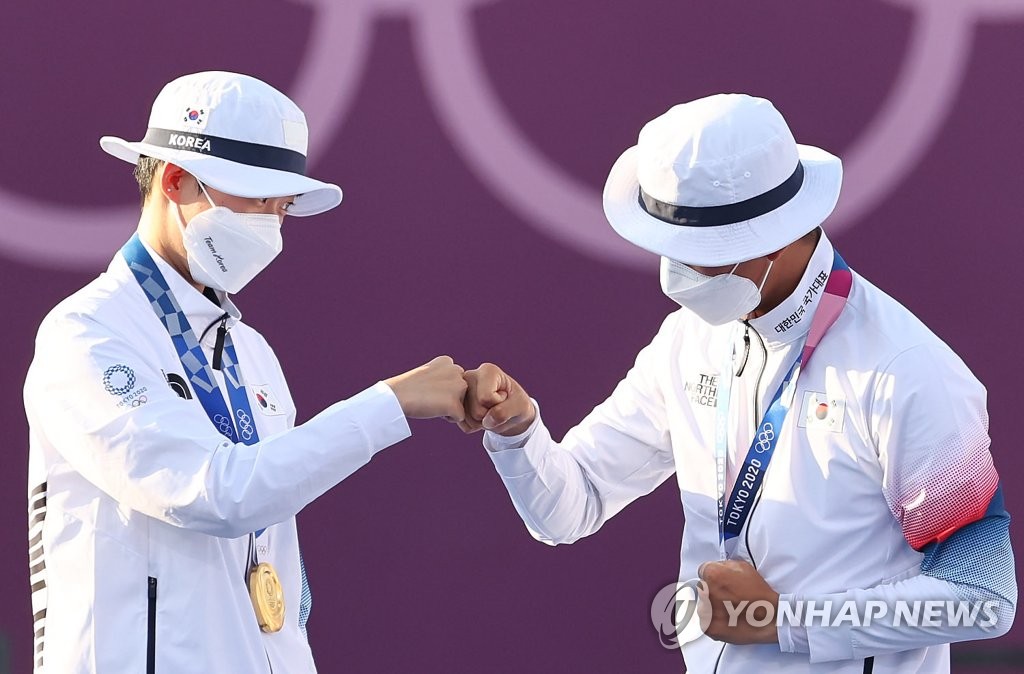 But this much is clear. Kim and An both outperformed teammates with far more international credentials to get to the mixed team event, and then prove their mettle on the biggest stage.

Kim said before the Olympics that the person he admires the most in archery is Kim Woo-jin, his current teammate and a 2016 Olympic champion.

"He has so much international experience, he's taught me a lot about training and life away from the field," Kim Je-deok said. "I still have so much more to learn from him."

Soon enough, Kim Je-deok will have his own admirers. 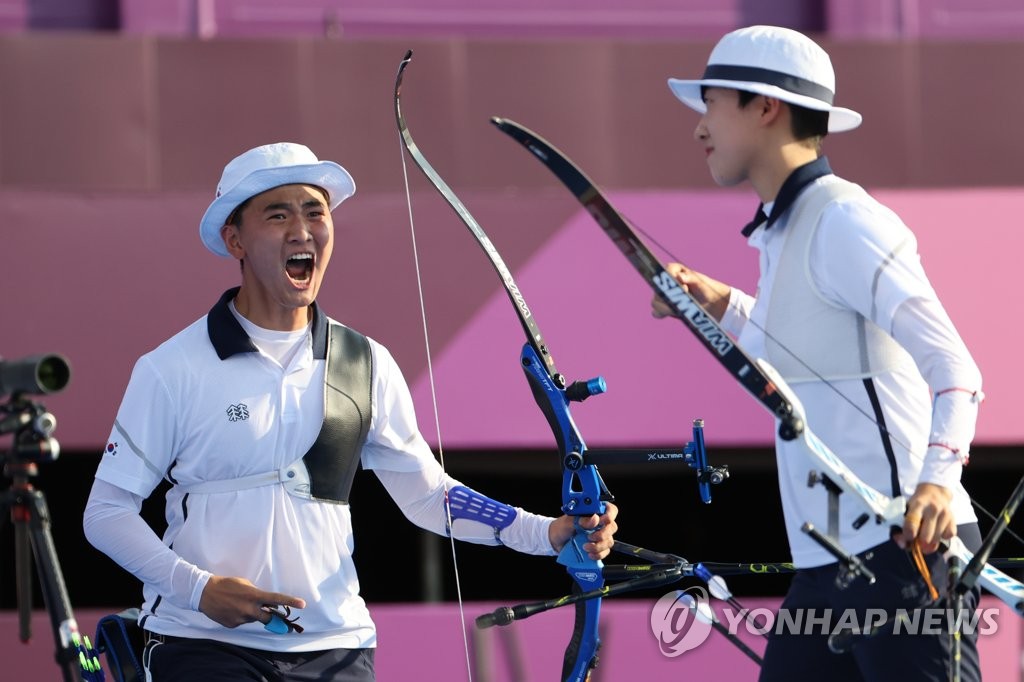