South Korea claimed its ninth consecutive Olympic gold medal in the women's archery team event on Sunday, beating the Russian Olympic Committee (ROC) by the set score of 6-0 in the final of the Tokyo Summer Games.

An San, Jang Min-hee and Kang Chae-young extended the most impressive winning streak in Olympic archery history. South Korea has won every gold medal in this event since it was introduced in Seoul in 1988. 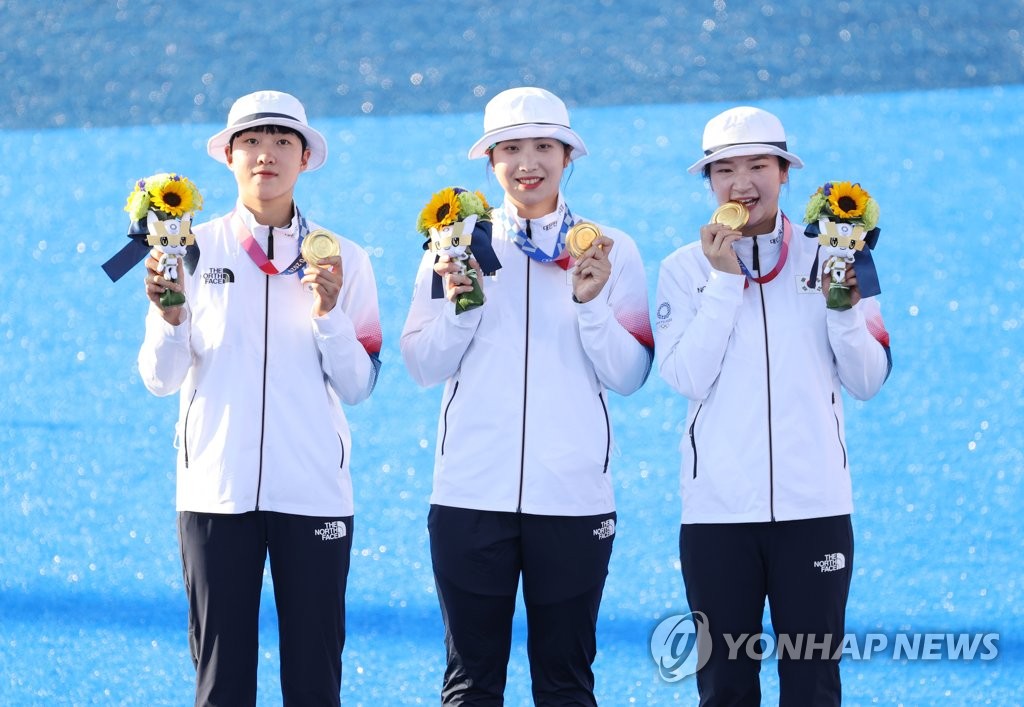 South Korea is now tied for the longest gold medal streak in all sports at the Olympics, on par with the United States in the 4x100m medley relay in swimming and Kenya in the men's 3000m steeplechase in athletics.

"It's an honor to set this mark. We all came here wanting to get the team gold medal more than anything else, and we're so proud of accomplishing that," An said.

Kang chimed in: "I am just so happy all three of us got to put the gold medal around our necks."

An, who teamed up with Kim Je-deok for the mixed team gold medal Saturday, became the first double gold medalist in any sport in Tokyo. She now has a chance to win a third gold medal in Tokyo, in the individual event, a feat that no one has accomplished in Olympic archery.

"My biggest objective here was to win the team gold medal," An said. "I won't try to do too much in the individual event. I'll just let luck take care of everything." 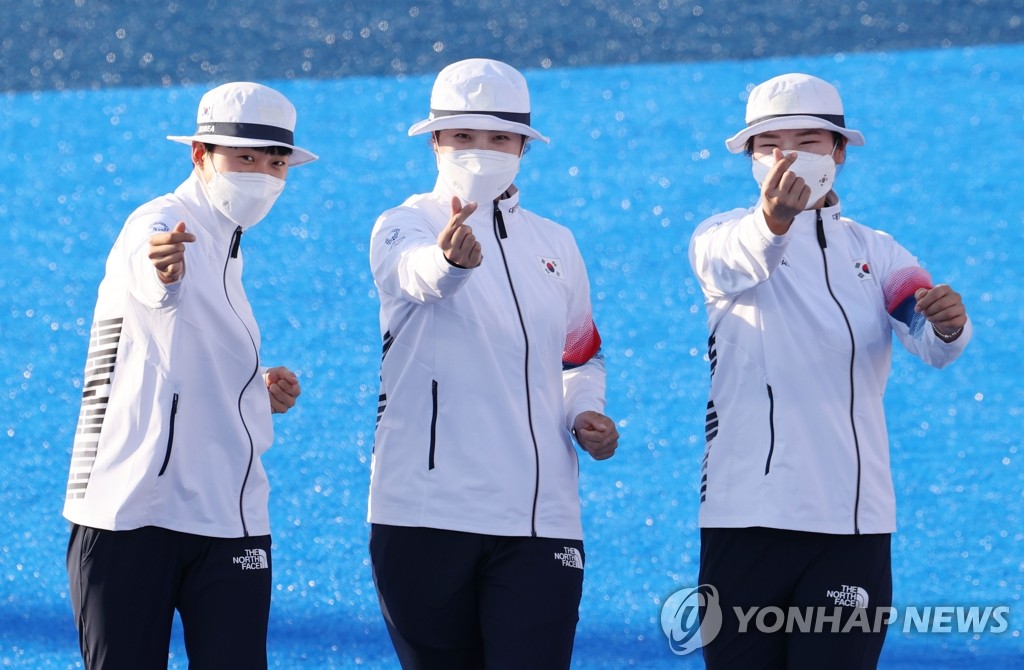 An, Jang and Kang are all competing in their first Olympics. This was the first time since Atlanta 1996 that South Korea fielded a women's archery team of three first-time Olympians.

The individual event starts Tuesday and the final is scheduled for Friday. 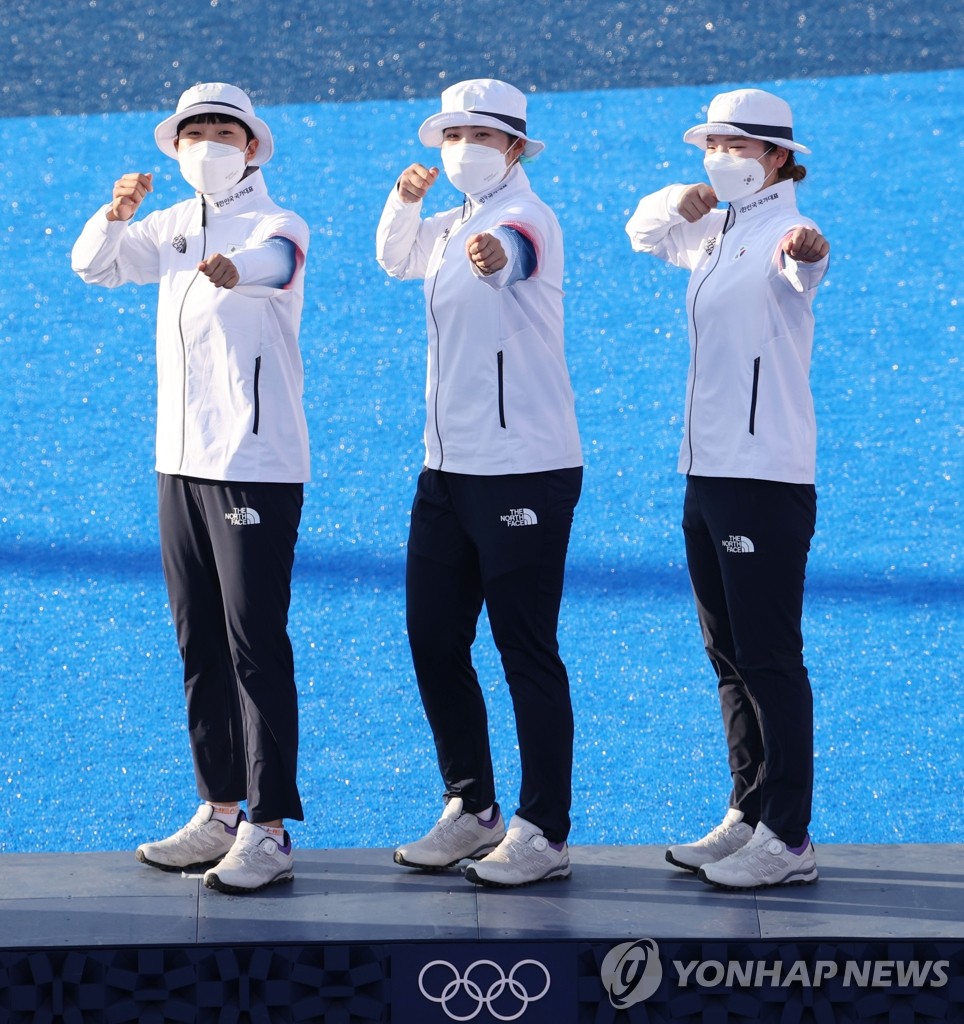 In the team event, each of the three shooters takes two arrows per set, for a total of six arrows. A set win is worth two points, and a tie is good for one point. The first team to reach five points wins the match.

In case of a tie after four sets, the teams go to a shoot-off, where the arrow with a higher score or the one closer to 10 is declared the winner.

The South Koreans combined for 56 points in the second set, three better than the ROC athletes.

Shooting first in the third set, the Russians only managed 51, with a 7 sandwiched by a couple of 8s. South Korea put up 54, capped off by Jang's final 9.

South Korea only needed a 6 to secure the one last point for the gold medal. Asked what was going through her mind holding the final arrow, Jang smiled and said, "I wanted to finish this as soon as I could."

Because of its state-sponsored doping program, Russia has been barred from using its flag and national anthem. Its athletes are competing under the ROC name. 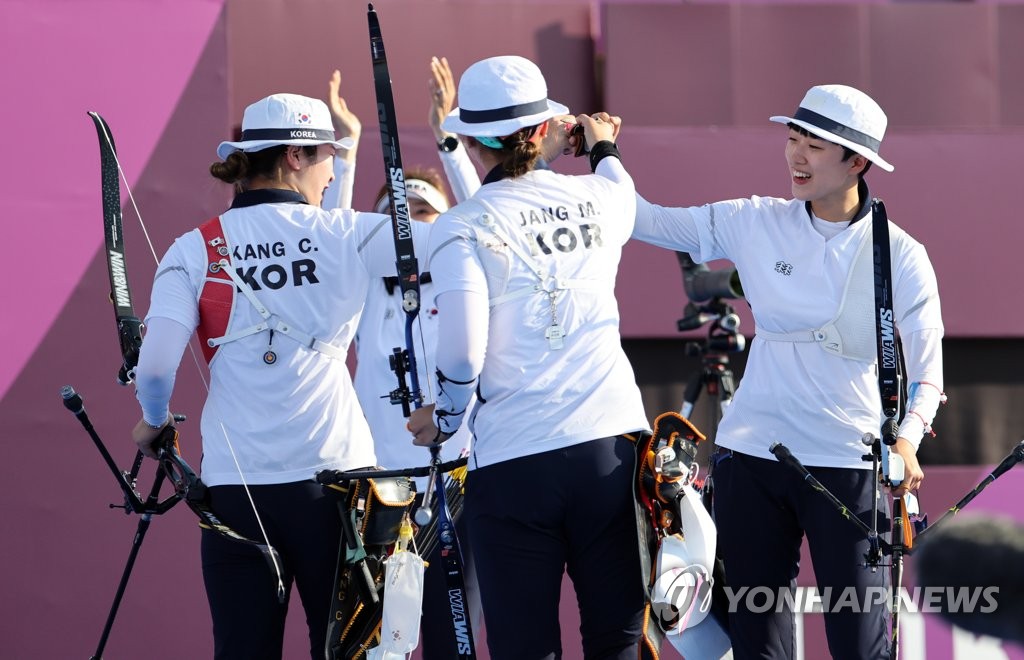