SEOUL, July 26 (Yonhap) -- South Korean units of three foreign carmakers suffered the worst sales slump since 1998 in the first half of this year in the face of toughening competition with their Korean rivals and luxury German brands, industry data showed Monday.

The Korean units of GM Korea Co., Renault Samsung Motors Corp. and SsangYong Motor Co. together sold 88,625 units in the domestic market in the first six months of the year, plunging 35.4 percent from a year earlier, according to the data by the Korean Automobile Manufacturers Association (KAMA).

The figure was the lowest since 1998, when the three companies sold only 73,169 units in the wake of the Asian financial crisis.

The trio's combined domestic production also fell 12.3 percent on-year to 240,319 vehicles over the six-month period due to sluggish demand and global chip shortages, also the lowest in 23 years, the KAMA data showed.

Renault Samsung suffered the deepest sales drop of 47.8 percent on-year to 28,840 units, hit by weak demand and lost vehicle production by weeks of labor strikes in May.

GM Korea's sales retreated 19.3 percent to 33,160 units as it was forced to scale down production due to a prolonged chip shortage.

SsangYong's sales dipped 34.8 percent to 26,625 units as the debt-ridden automaker grappled with parts supply issues with its contractors.

SsangYong's Indian parent Mahindra & Mahindra Ltd. has been looking for investors to buy its majority stake in the money-losing Korean unit since last year as part of its global reorganization plan amid the COVID-19 pandemic.

Market watchers attributed their tepid performance to a lack of new competitive models that can appeal to younger generations, who have emerged as a major consumer group for luxury German cars and Tesla's EVs, and waning brand power.

They remained downbeat about the foreign underdogs' outlook in the near future, expressing concerns about their potential impact on employment in the domestic auto industry.

"The three foreign carmakers will find it hard to turn around for a while as they are losing consumer trust due to concerns over their potential exit from the domestic market," Lee Hang-koo, a researcher at the Korea Automotive Technology Institute, said. 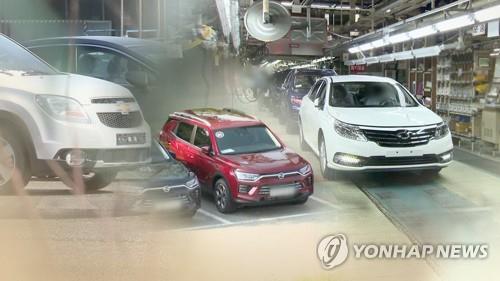