WASHINGTON, July 26 (Yonhap) -- An international forum of history teachers from the United States and 21 other countries got under way on Monday to discuss ways to teach the true and accurate account of the Korean War to their students.

The 2021 World Congress of Korean War Veterans and History Teachers began at a Washington hotel with some 60 history teachers from the United States taking part in in-person meetings. The annual event is hosted by the Korean War Legacy Foundation (KWLF) and sponsored by South Korea's Ministry of Patriots and Veterans Affairs.

"The Korean War was the most significant even that had fundamentally changed the bilateral relationship between South Korea and the United States in their 144 years of shared history," KWLF Chairman Han Jong-woo said.

"It is important to establish a network of friendship with the countries that fought in the war by teaching their shared history, so their legacy will not be forgotten even after all their Korean War veterans pass away," he added, highlighting the importance of teaching accurate accounts of the war. 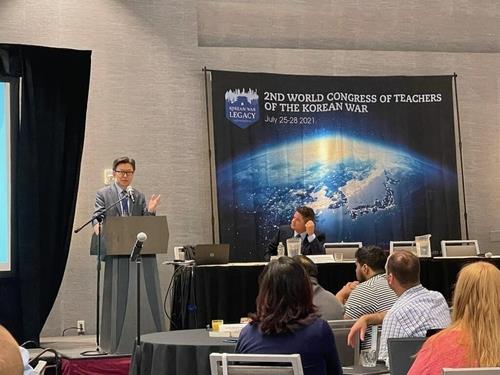 To this end, the KWLF has set up a free digital library, called the Korean War Memory Bank, that offers some 1,500 interviews with Korean War veterans conducted by the foundation.

This week's forum partly aims to show the history teachers from the 22 Korean War participating countries how they can access the online library and use the interviews and other materials in their own teaching.

"Despite the great significance of Korea and the Korean War, most history courses in our K-12 institutions only cover the Korean War in a few negligible sentences. The foundation seeks to change this by honoring veterans, creating teaching materials and by connecting teachers with Korea scholars," KWLF said earlier. "One of the primary goals of the Korean War Legacy Foundation is to preserve and commemorate the legacy of the Korean War and the honorable service of Korean War veterans."

Even after nearly seven decades, however, South and North Korea remain divided and at war, technically, as the Korean armistice was never replaced by a peace treaty.

The KWLF has also been working to rally international support for declaring an official end to the tragic war.

This year's World Congress of Korean War Veterans and History Teachers, second of its kind, will come to an end on Tuesday after virtual sessions that will also involve history teachers from 21 other countries that took part in the Korean War.