SEOUL, July 27 (Yonhap) -- Three members of the Korean Confederation of Trade Unions (KCTU), who tested positive for COVID-19 after participating in a massive outdoor rally in downtown Seoul on July 3, had actually contracted the virus from a restaurant, the militant labor group said Tuesday.

Yang Kyung-soo, head of the KCTU, called a news conference to announce that the COVID-19 infections of the three KCTU members were confirmed to have occurred at a restaurant on July 7 and there have been no additional confirmed cases among all 4,701 rally participants. 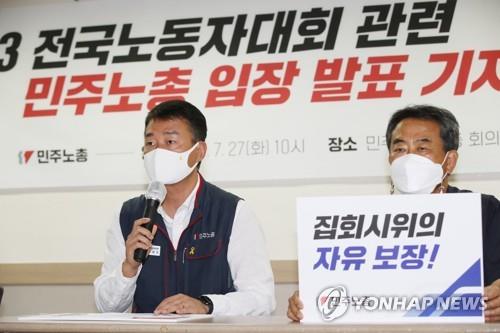 The KCTU leader then asked Prime Minister Kim Boo-kyum to formally apologize for making statements that could be misunderstood to suggest that the July 3 rally was the cause of the ongoing fourth wave of the coronavirus pandemic.

Earlier on July 17, the prime minister issued an emergency statement to disclose the virus infections of three KCTU members who joined the Seoul rally, and issued an executive order mandating everyone who took part in the rally be tested.

The KCTU also asked Yoo Seong-min, a presidential hopeful from the main opposition People Power Party, and Ahn Cheol-soo, head of the minor opposition People's Party, to offer an apology for similar reasons.

Moreover, the labor group said it will take all possible legal measures against some media outlets for carrying unsubstantiated reports about the July 3 rally.

The KCTU then asked the government to shift the focus of its quarantine policy away from excessive restrictions on outdoor gatherings, where the possibility of infection is significantly low, saying the main route of virus transmissions is via congested indoor spaces.

In consideration of the serious COVID-19 situation, the KCTU said it will postpone an outdoor rally slated for Thursday in the central city of Sejong.