Its net profit reached 288.3 billion won (US$250.5 million) in the April-June period, up from 47.7 million won a year earlier, Samsung SDI said in a regulatory filing.

The operating profit was 10.7 percent higher than the average estimate, according to a survey by Yonhap Infomax, the financial data firm of Yonhap News Agency, and marked the highest-ever quarterly record.

"As EV batteries enhanced profitability thanks to rising sales in the European market, its second-quarter earnings turned to a profit," Samsung SDI said in a statement. "ESS sales increased, led by major projects in the U.S."

In the second half, the company expected rising sales of EV batteries in the European market and robust demand for ESS in the U.S. market while projecting solid demand for materials for OLED screens and semiconductors. 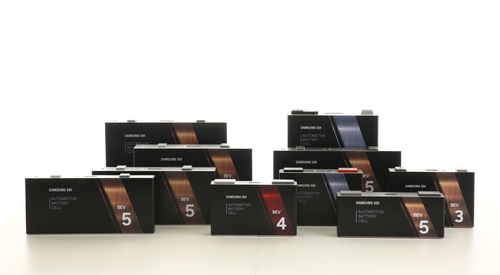 The battery-making unit under Samsung Electronics Co. said its Hungary factory is set to supply next-generation battery cells with high-nickel content to major automakers, including German automaker BMW, in the coming months, expecting robust sales in the fourth quarter.

The company said it will push for building a new factory in the U.S. "before it's too late," considering the new trade agreement that raises the need to produce auto parts in U.S. factories.

Under the United States-Mexico-Canada Agreement (USMCA) that took effect last year, vehicles that have 75 percent of North American content can avoid tariffs from 2025.

The company supplies batteries to German automaker BMW and Fiat, now part of the Stellantis family, and has secured a deal from U.S. startup Rivian, backed by Amazon and Ford, for its electric pickup and SUVs.

Stellantis, the world's No. 4 automaker, has been considered a potential partner for Samsung SDI as it plans to build its own battery production line for its EV transition.

Samsung SDI has battery cell plants in South Korea, Hungary and China and operates a battery pack assembly line in Michigan built in 2018.

It also vowed to ramp up efforts to secure stable supply chain of key battery materials, including cathode, anode and separators, via joint ventures and other strategic partnerships with mining and other companies.

Shares in Samsung SDI advanced 3.12 percent to 760,000 won on the Seoul bourse, outperforming the benchmark KOSPI's 0.24 percent gain. The earnings report was released before the market close.