Late Catholic priest and U.S. Army chaplain Emil J. Kapaun was given the Taegeuk Order of Military Merit, the highest decoration for outstanding military service, on the occasion of the 71st U.N. Forces Participation Day, according to Cheong Wa Dae.

Former Australian Brigadier Colin N. Kahn received the Order of Civil Merit, Pomegranate Medal, which is given to those who have contributed to national development.

"The U.N.'s participation in the Korean War engraved in the world's history the lesson that solidarity and cooperation can protect freedom and peace," Moon said during the ceremony. He expressed hopes the sacrifice and devotion of the two war heroes will remain in people's hearts.

This marks the first time that a South Korean president has bestowed a state medal on U.N. Forces veterans who fought in the three-year war. 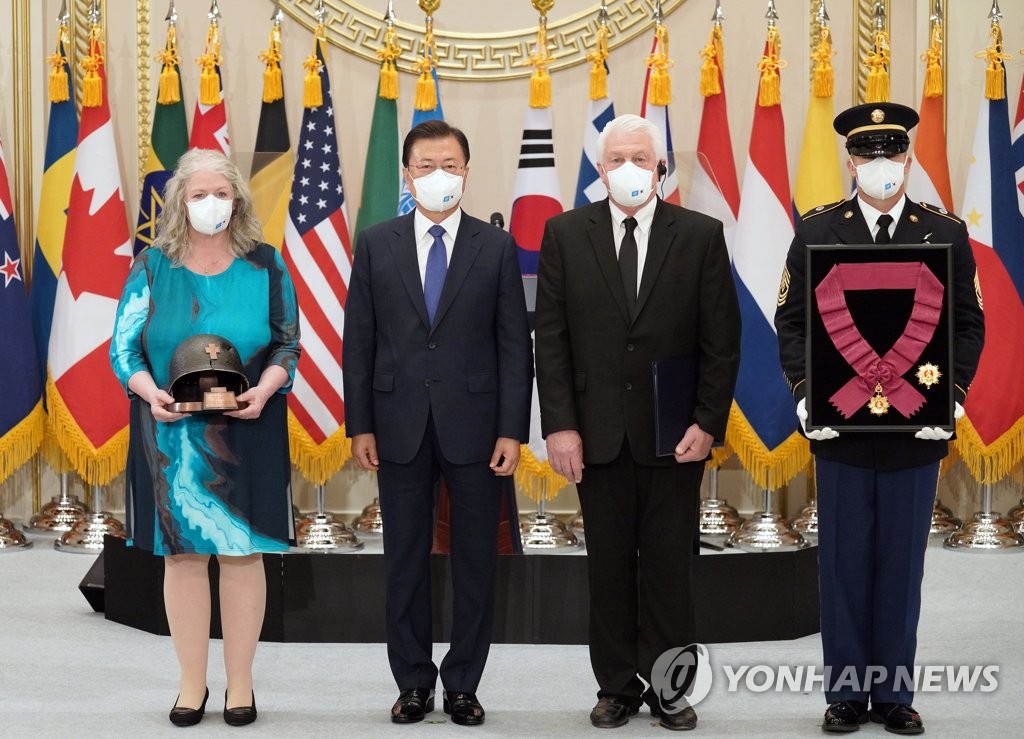 Kapaun participated in the war in July 1950. He was captured by the enemy while looking after wounded soldiers despite a pullout order amid an airstrike by the Chinese Army, which fought for North Korea.

He was sent to a prisoner of war camp and passed away there in 1951.

His remains were found in March, 70 years after his death, at the National Memorial Cemetery of the Pacific in Hawaii and finally returned to his family.

His nephew Ray E. Kapaun received the medal on behalf of the war hero in the award ceremony at the presidential office in Seoul.

Kahn joined the Korean War in 1952 as a platoon commander of the Australian Army. After returning home, he worked to share with the world the horrors of the war as well as the miraculous post-war development of South Korea.

His great-grandniece visited Seoul to receive the medal on behalf of Kahn due to his health problems.

In pre-recorded video footage played at the award ceremony, Kahn expressed his pride in contributing to the reconstruction of Korea and wished for lasting peace on the Korean Peninsula. 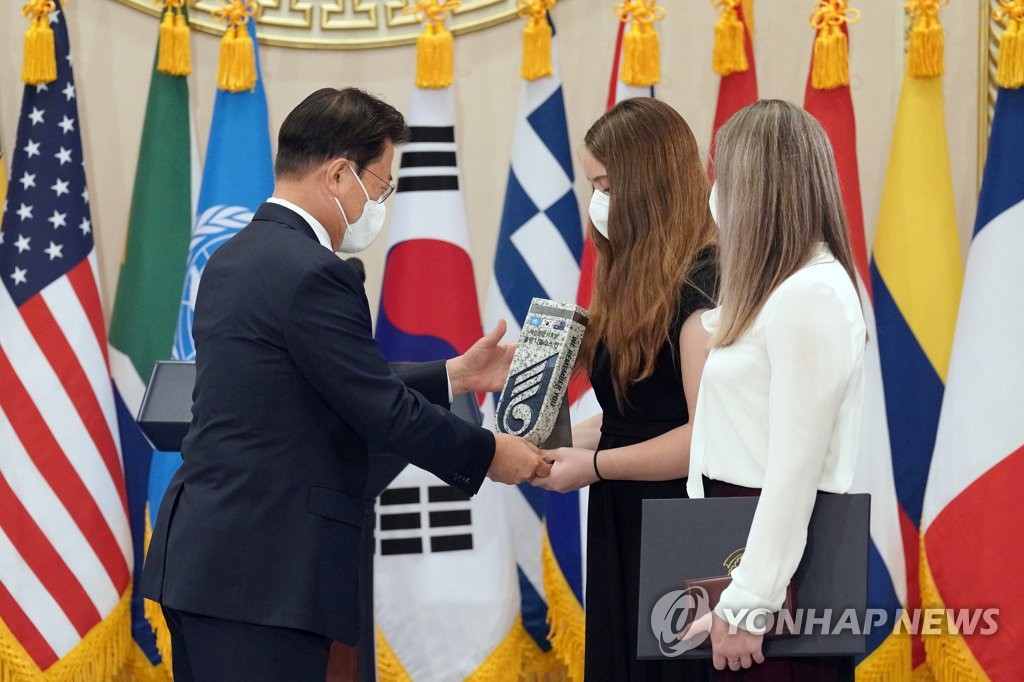 The president gave an iron helmet with a cross symbol to Kapaun's family as a present.

"His life will be great heritage for both South Korea and the U.S., as well as mankind," Moon said, commemorating the hero.

To Kahn's family, the president delivered a memorial tablet made out of granite mined in Gapyeong, where the Australian Army fought a battle during the Korean War.

"The government will return the sacrifice and devotion it received from the war veterans and cherish the alliances forged in blood in war," Moon said.

The ceremony was attended by U.S. Forces Korea Commander Gen. Paul LaCamera, Cardinal Andrew Yeom Soo-jung, the archbishop of Seoul, and diplomats from the Vatican, U.S. and Australia stationed in South Korea. 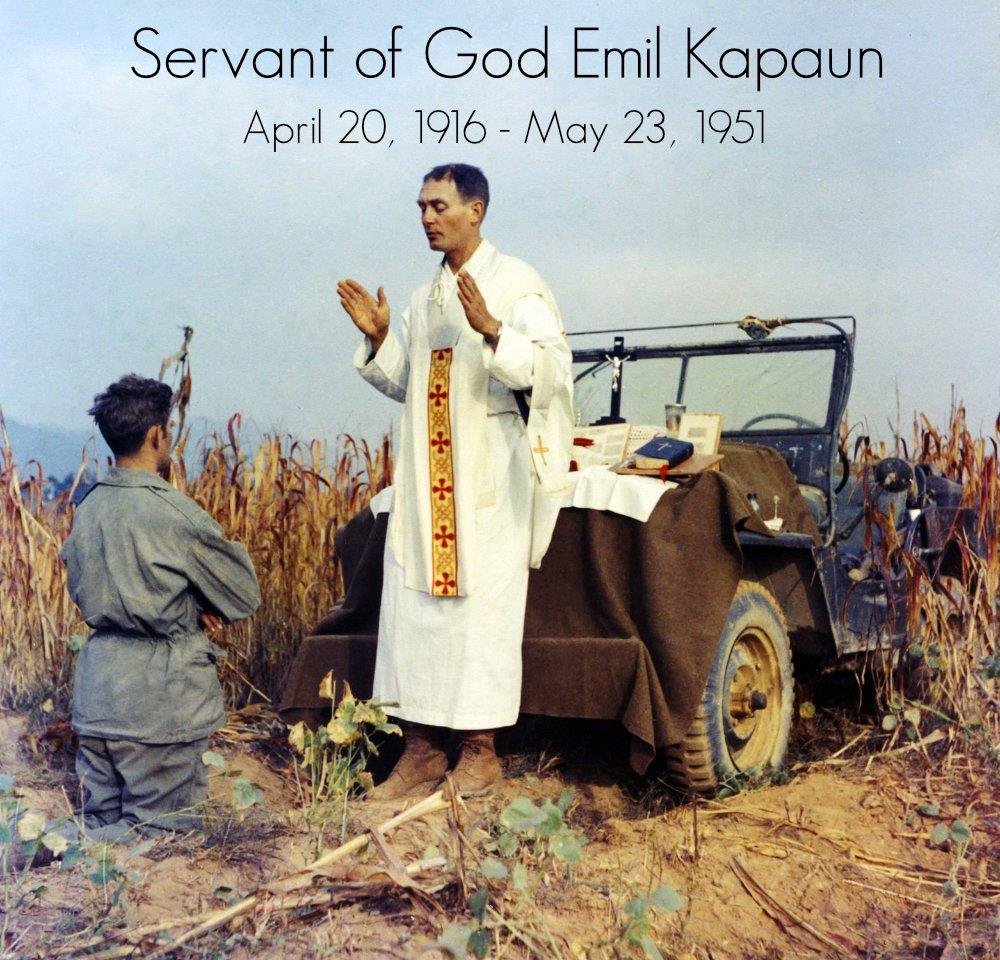