SEOUL, July 27 (Yonhap) -- The reopening of communication lines between South and North Korea following a 13-month severance Tuesday drew attention to what liaison channels are in operation between the two sides that remain technically at war after the 1950-53 Korean War ended in a truce, not a peace treaty.

The two sides have five direct phone lines, including a hotline between President Moon Jae-in and North Korean leader Kim Jong-un, a set of military communication lines, and a liaison line between the South's unification ministry and the North's liaison office.

The other two are one between the spy agencies of the two sides -- the South's National Intelligence Service (NIS) and the North's United Front Department -- and a trial communication line set up at the border village of Panmunjom to check whether the other phone lines are operating well.

Last year, the North severed all but the spy agency line in anger over anti-Pyongyang propaganda leaflets sent across the border by South Korean activists and even blew up a joint liaison office built by the South in the North's city of Kaesong.

On Tuesday, all four lines were restored under an agreement between Moon and Kim.

The unification ministry confirmed that the two sides had successful phone calls in the morning via two lines under its management -- the Panmunjom line and the liaison line.

Even though the joint liaison office in the North's Kaesong was blown up in June last year, the liaison communication line, which had been set up earlier that year, has remained in place without damage, a ministry official said. 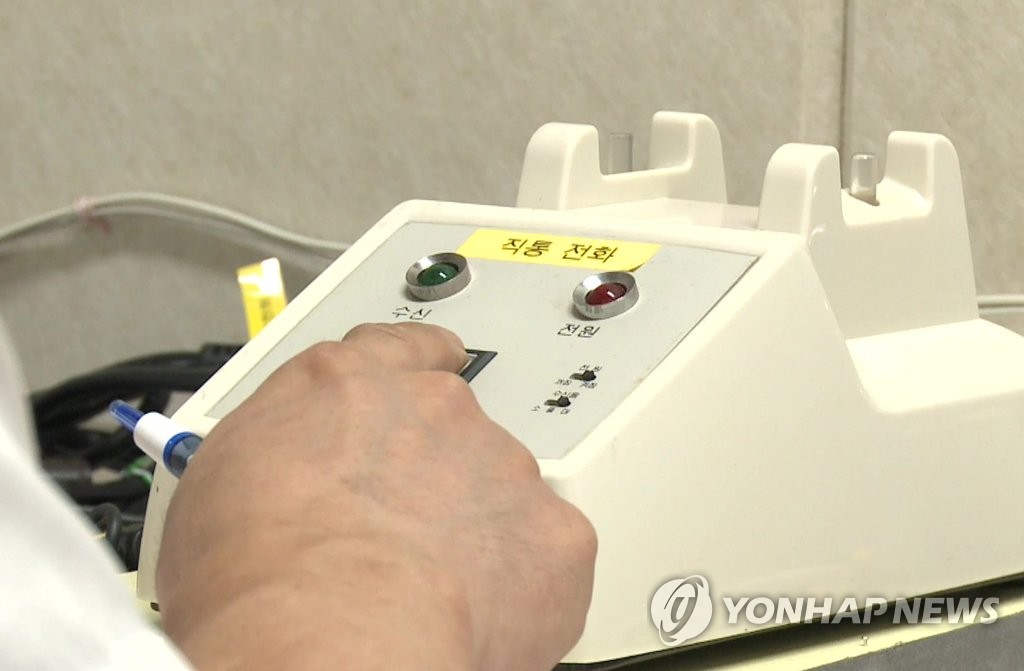 The military communication line consists of two channels: one set up across the western border and the other across the eastern border. The militaries of the two sides hold regular telephone calls twice a day -- at 9 a.m. and 4 p.m. -- to prevent accidental clashes.

The two sides had a successful phone call in the morning via the western line, but technical problems were found in the eastern line, the defense ministry said.

Ship-to-ship radio links between the two Koreas under the global merchant marine communication network are also operating normally, according to officials.

President Moon also has a phone on his desk that directly connects to the North's highest governing body, the State Affairs Commission, though it appears to be serving only a symbolic role as of now.

The line was established in 2018 but is known to have remained silent except for an initial test call.

The two countries' spy agencies also have a hotline, which was not mentioned by the North as one of the lines subject to the severance last year.

The communication channel between the National Intelligence Service and the North's United Front Department was established following the first-ever inter-Korean summit between then President Kim Dae-jung and late North Korean leader Kim Jong-il in 2000.

It was not used when relations between Seoul and Pyongyang remained sour but was restored in 2018 amid a reconciliatory mood.

In September, NIS director Park Jie-won delivered North Korean leader Kim Jong-un's message of apology regarding its military's killing of a South Korean fisheries official to Moon in a sign the channel has remained functional.