SEOUL, July 27 (Yonhap) -- New United Nations Command (UNC) Commander Gen. Paul LaCamera on Tuesday vowed an "unwavering" commitment to the security of the Korean Peninsula, saying that the alliance has "what it takes to fight and win on the most dangerous piece of ground."

LaCamera made the remarks during a ceremony held at a U.S. military base in Pyeongtaek, 70 kilometers south of Seoul, to mark the 68th anniversary of the 1950-53 Korean War armistice agreement, saying that permanent peace remains "elusive."

The two Koreas are still technically at war, as the conflict ended in a truce, not a peace treaty.

"Our alliance is strong and has what it takes to fight and win on the most dangerous piece of ground the last 100 meters," the U.S. general said.

"While we are yet to achieve the elusive permanent peace agreement, the armistice agreement provides the conditions for diplomacy to pursue this objective," he said, promising to "remain prepared to respond to opportunities that may lead to permanent peace."

LaCamera took office earlier this month to lead the 28,500-strong U.S. forces in South Korea, as well as the South Korea-U.S. Combined Forces Command and the U.S.-led UNC.

Established in 1950 under a U.N. mandate in response to North Korea's military provocations, the UNC has played a role as the enforcer of the armistice agreement that halted the Korean War.

"The United Nations Command's commitment to this alliance 68 years later is firm, is unwavering, and indeed, will remain so," LaCamera said.

The remarks came as South and North Korea announced their leaders' agreement to improve ties on Tuesday, restoring communication lines that had been cut off for more than a year amid stalled nuclear negotiations. 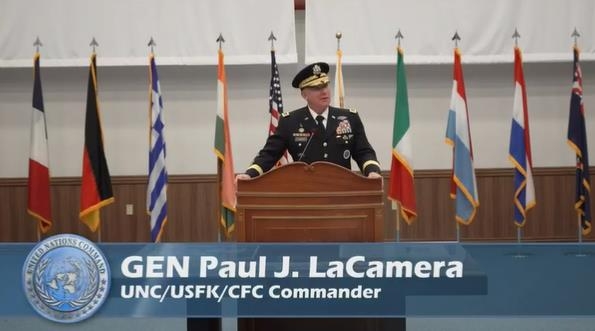