SEOUL, July 28 (Yonhap) -- Presidential contenders from the ruling and opposition blocs have added a new approach to their widening campaigns to win voters at next year's presidential election: reaching out to cats and dogs.

Gyeonggi Province Gov. Lee Jae-myung and Rep. Lee Nak-yon, the top two presidential hopefuls from the ruling Democratic Party (DP), have been stepping up the promotion of their presidential campaign pledges dedicated to pets and, ultimately, pet and animal lovers.

Gov. Lee is not a pet owner himself, but he has led a range of pro-pet projects while serving as mayor of Seongnam, just south of Seoul, and then governor of Gyeonggi, including those on the creation of dog parks and cat adoption centers.

He has also led a trap-neuter-return program for stray cats.

One of the campaign workers for Lee said he is probably the most outstanding candidate in terms of animal and pet protection policies, highlighting the policy efforts the governor has carried out.

Rep. Lee Nak-yon, a former DP chief, has also been proactive in raising public awareness about pets and animal rights.

Last month, he visited a dog park in western Seoul as part of his presidential campaigning. Earlier this month, Lee attended a pet promotion event in Seoul in efforts to reach out to pet owners and veterinarians.

He recently said the country's Animal Protection Act should be further expanded and upgraded into an animal welfare act.

According to a survey by KB Financial Group Inc. late last year, about 1 in every 4 people in South Korea, over 14.4 million people, raise pets. Against such a backdrop, winning the hearts and minds of pet owners has emerged as a major task for candidates competing for the March 9 presidential election. 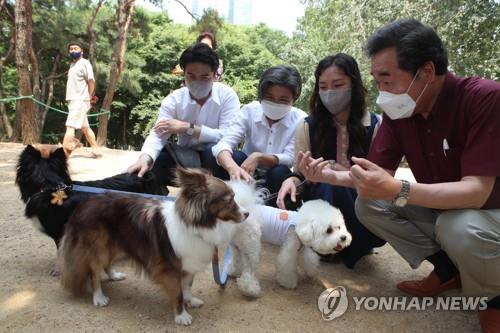 He recently opened an Instagram account dedicated solely to his pet dog named Tory, which he adopted from an animal shelter in 2012. Including Tory, a mixed Jindo dog, Yoon is the owner of four dogs and three cats.

Choe Jae-hyeong, former chief state auditor and leading presidential hopeful affiliated with the main opposition People Power Party, is also planning to join in and release images of his pet cat on his social media account soon. Choe has cared for the Turkish Angora named Mindeulle, which means dandelion in English, since 2002. 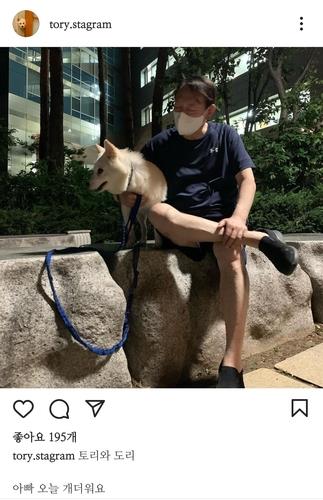