TOKYO, July 28 (Yonhap) -- He may not look the part at first glance, but Andre Jin Coquillard calls himself "a prototypical Korean."

Born in Seoul to a Korean mother and an American father, Coquillard, a member of the South Korean Rugby sevens team at the Tokyo Olympics, is just like all other Korean athletes in one important aspect.

After South Korea fell to Japan 31-19 in the 11th-12th placement match Wednesday at Tokyo Stadium, Coquillard was in tears. With the South Korean national flag, "Taegeukgi," draped on his broad shoulders, Coquillard said he wanted nothing more than to beat Japan in the Olympics. 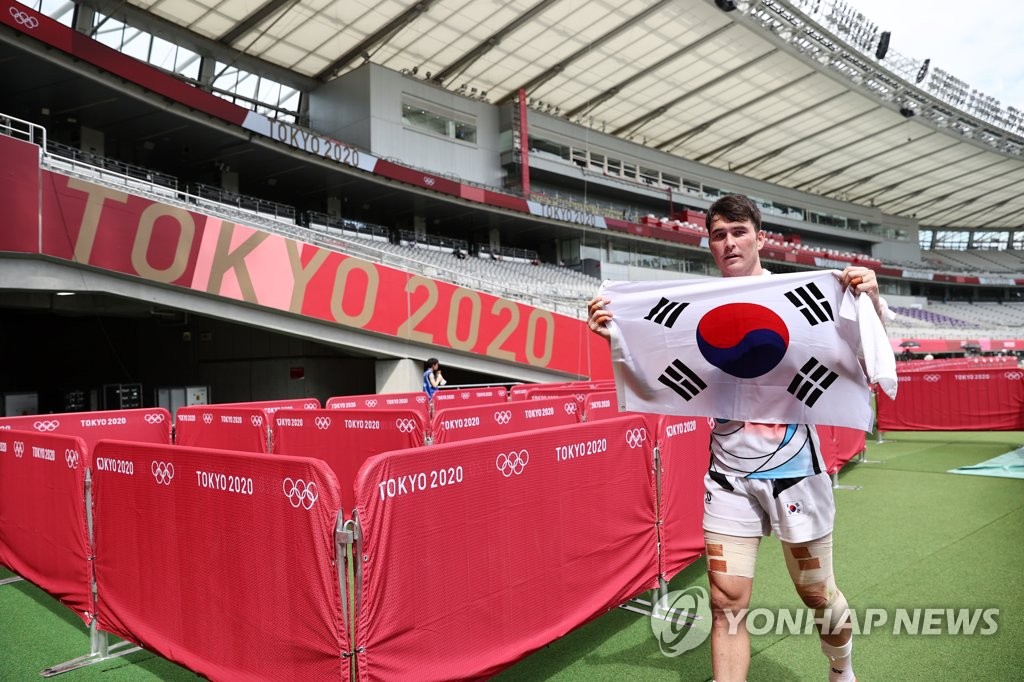 "Losing always hurts, but losing to Japan hurts even more," Coquillard said, speaking in Korean. "Even if for just one day, I wanted to raise Taegeukgi up here at Tokyo Stadium. I am devastated that I never got to do it."

Coquillard's mother, Kim Dong-su, was a popular fashion model in the 1980s. She was one of the very first South Korean models to carve out a successful international career. The rugby player said he was blessed with the strong build and physique from his parents.

"I may not be fast or athletic, but my parents gave me a strong body," he said. "My job is to bulldoze my way across the goal line. I was ready to break down walls."

Coquillard said he knows the history of the sporting rivalry between South Korea and Japan all too well, and added, "I look like a foreigner on the outside, but my heart is all Korean."

"I got my blue eyes and my looks from my father, and my heart and passion from my mother," he said. "I am sure my mother is crying now after watching us on TV." 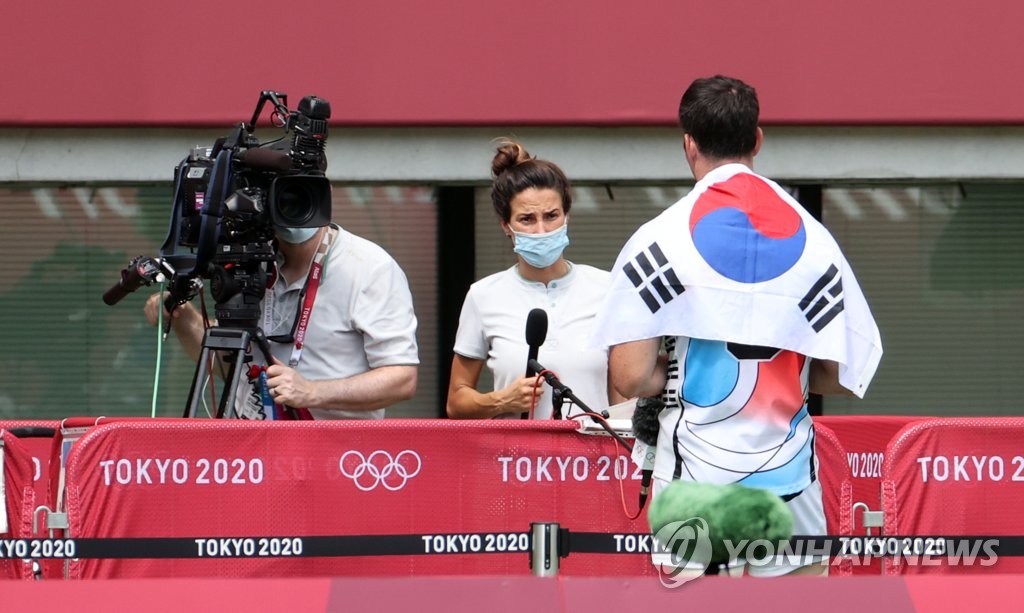 Coquillard, whose Korean name is Kim Jin, said he was proud of his mother for helping promote South Korea as an international model in the pre-internet age, and he too wants to do the same through the sport of rugby. He also yearns for recognition as a Korean, regardless of his appearance.

Coquillard started playing rugby at a boarding school in Canada in 2006 and then at the University of California, Berkeley. Now 30, Coquillard said he doesn't have much left to give as a player, but he wants to help develop the sport in Korea in other capacities.

"Until the day I die, I want to help Korean rugby," he said. "Whether it's as a coach or an administrator, I want to help teach rugby culture and techniques to Korean athletes." 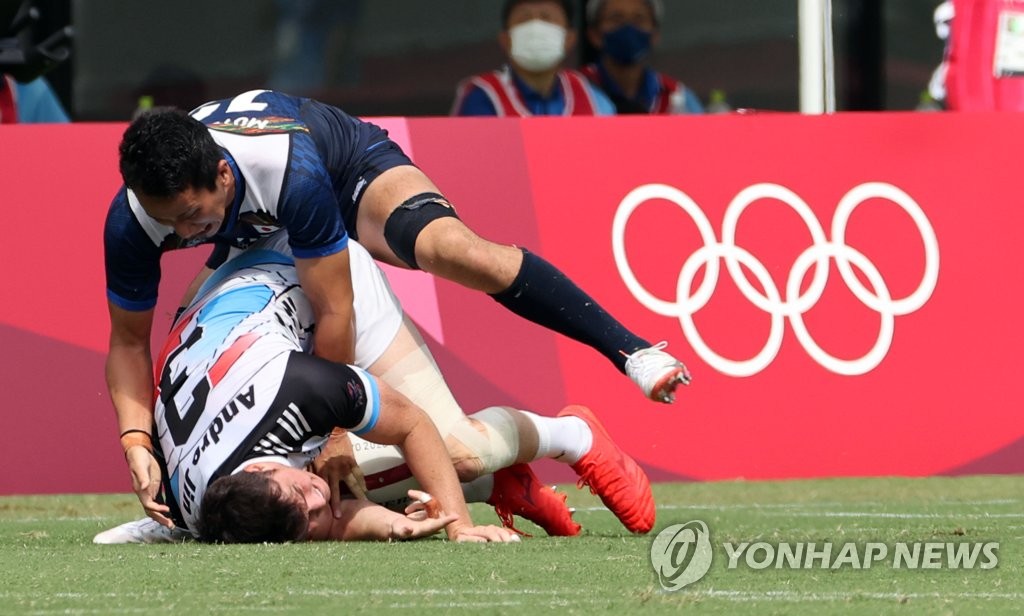 Speaking in English to another reporter after the match, Coquillard said he wanted to inspire children in South Korea to take up the sport.

"Ever since we qualified (for the Olympics), we wanted to use this opportunity as a coming-out party for rugby for the Korean people," he said. "It's probably the first time (rugby) has been on live TV. If 1,000 kids or 100 kids pick up the rugby ball tomorrow, that's all I want." 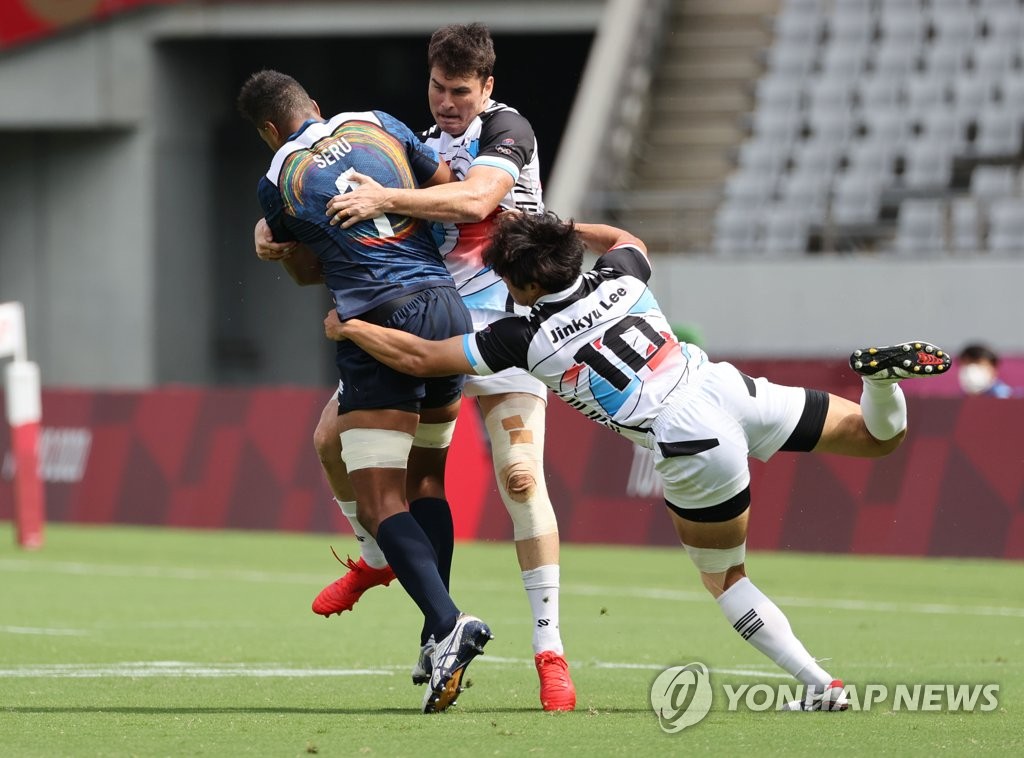