SEOUL, July 28 (Yonhap) -- Four parcel delivery workers have collapsed over the past six days while toiling under poor conditions in the scorching weather, their union said Wednesday.

He was loading packages in the facility without windows or fans when the room temperature hit 39.4 C, the union said. He complained of vertigo and fell down foaming at the mouth. He was sent to a nearby hospital.

"Union members have demanded the installation of windows, but the office has continued to ignore such demands," the union said. 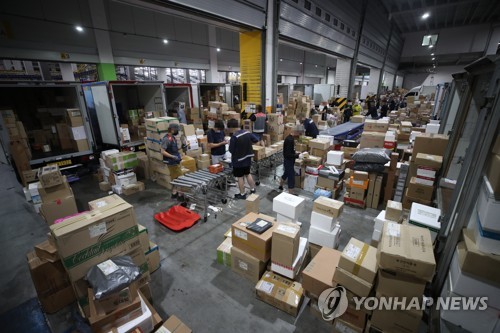 On Friday, a 50-year-old worker contracted with Lotte was exhausted in his truck in a Seoul logistics center. The temperature there was around 35 C, and there were no fans installed, the union said.