The Korean Construction Workers' Union (KCWU) made the request during its representatives' meeting with government officials and lawmakers at an apartment construction site in Seoul.

Unrelenting hot weather has continued in most parts of the country for up to 10 days, with daily maximum temperatures reaching 36 C in Seoul and elsewhere in the day, according to the state weather agency. 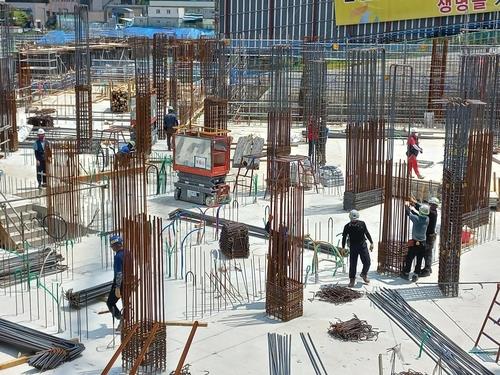 The KCWU demanded at the meeting that more rest facilities be made available for field construction workers and construction periods be adjusted in consideration of the abnormal weather conditions.

While the meeting was under way, construction workers wearing masks, hard hats and gloves were seen moving heavy steel rebars under the scorching sun. The sensible temperatures surged up to 40 C at the site even in the shade. The railings of the iron stairs were too hot to hold with bare hands.

"Construction workers get fully wet with sweat even after working for just an hour," a KCWU official said, calling for more spaces for workers to take showers and relax.