Foreign Minister Chung Eui-yong made the remarks, after the two Koreas reactivated communication lines on Tuesday, 13 months after North Korea severed them in anger over activists having sent anti-Pyongyang leaflets across the border into the North.

The reactivation raised hopes for progress in Moon's peace drive, which had been hamstrung by the North's explosion of a joint liaison office in June last year, its hardening rhetoric and unceasing drive for its nuclear program.

"The resumption of the communication hotlines between the two Koreas is a clear expression of the commitment of the leaders of the South and the North to restore mutual trust and move forward the inter-Korean relations," Chung said during a peace forum hosted by the Institute of Foreign Affairs and National Security of the Korea National Diplomatic Academy. 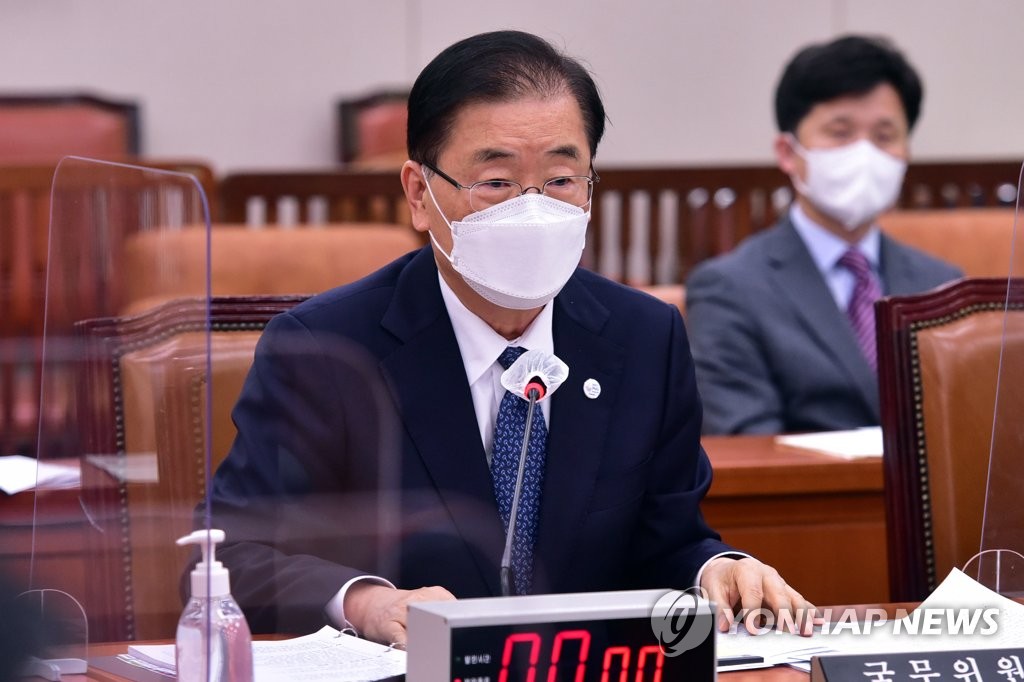 Stressing the task of fostering a lasting peace on the peninsula is a "mission of the international community" seeking to maintain stability, Chung called for concerned countries to cooperate to move forward Seoul's peace initiative.

"We need to gather cooperation and insight not only from both Koreas but also from all other concerned nations," he said. "The peace process on the Korean Peninsula must go forward without halt, and the Korean government will continue, without haste, doing its utmost to deliver a sustainable outcome."

"We hope that the ROK-China cooperation will expand further to stabilize the political landscape of the Korean Peninsula and advance the peace process on the Korean Peninsula," he said, referring to South Korea's official name, the Republic of Korea.

Chung described Japan as "our cooperative partner in the journey toward peace and prosperity in Northeast Asia and the world," and called for joint efforts to develop bilateral ties in a "future-oriented" manner.

Seoul and Tokyo have been caught in a protracted spat over Japan's wartime forced labor and sexual slavery, and its export restrictions. Japan colonized Korea from 1910-45.

"The ROK and Japan should work together to develop our relations in a future-oriented manner while squarely facing history and trying to learn lessons from it with humility," he said.

"In addition, the North Korean nuclear and missile issue is a significant challenge that calls for cooperation among the ROK, Japan, and the United States," he added.