CHIBA, Japan, July 29 (Yonhap) -- There are few things more exciting in sports than watching Olympic athletes at the top of their game.

In winning their team gold medal Wednesday night at the Tokyo Olympics, the South Korean sabre fencers Kim Jung-hwan, Gu Bon-gil, Oh Sang-uk and Kim Jun-ho performed with power, grace and ease that defy the difficult nature of the sport.

They manhandled Italy 45-26 at Makuhari Messe Hall B in Chiba, east of Tokyo, to bring South Korea its second straight gold in the men's sabre team event. 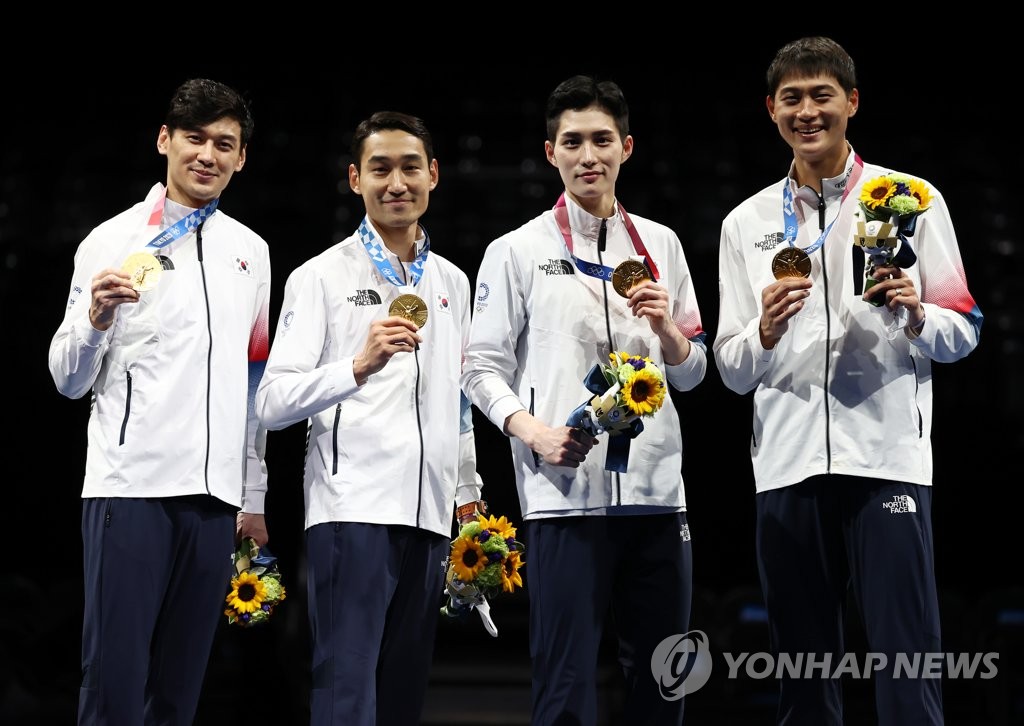 This competition wasn't part of the 2016 Summer Games in Rio de Janeiro, where it was kept out as part of the Olympic fencing rotation. The title defense was accomplished nine years apart, with half the team, Kim Jung-hwan and Gu, having been involved in both.

And Oh said the team known as "The Avengers" is just getting started.

"This is the new beginning for sabre fencing in Korea, and I trust my teammates to keep putting in the work," said Oh, the youngest member of the team at 24. "I think we can do even better. The next goal is to defend our gold medal (in Paris in 2024). If we stay together, we will continue to win matches."

No Asian country had won an Olympic gold in the men's sabre team event until South Korea's breakthrough in 2012.

In the past, South Korea wasn't just David against Goliaths that were European powers. It was David's little brother.

That 2012 gold medal was possible because South Korean fencers changed the way they battled bigger and taller foes. South Koreans started to capitalize on their superior speed and deft footwork.

The current quartet has now teamed up for an Olympic gold in addition to two world titles and an Asian Games gold medal, all of them within the past four years. 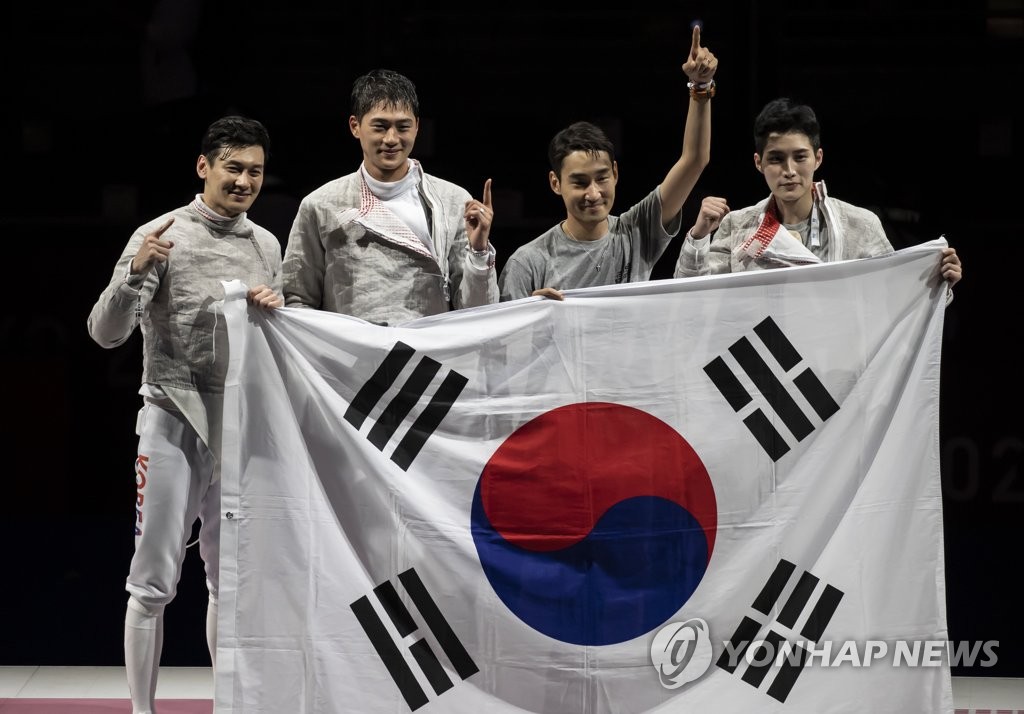 Incidentally, South Korea won the 2012 gold medal in London by the exact same score from Wednesday, 45-26 over Romania.

"I get that question a lot. I still think the London team (in 2012) was stronger," said Gu, who teamed up with Kim Jung-hwan, Won Woo-young and Oh Eun-seok. "We had some veteran savvy on that team, and the level of competition was higher back then."

Gu observed that countries like Romania and Russia fell off the radar a bit in recent years because their transition to a new generation of fencers wasn't nearly as smooth as that for South Korea.

"We had fencers like Woo-young and Eun-seok who stayed competitive for a long time, and that gave new fencers enough time to grow," Gu said. "Other countries saw their veterans fade away without anyone waiting in the wings. And it took them three to four years to return to relevance. 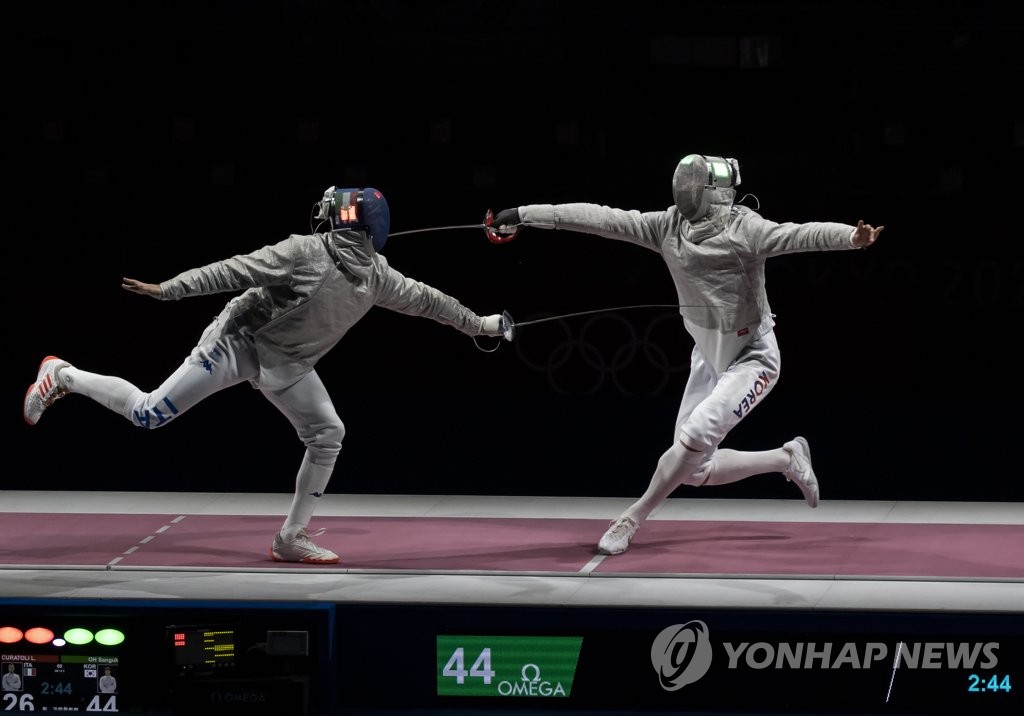 "If it hadn't been for veterans like Woo-young and Eun-seok, we wouldn't have won our gold medal today," Gu added.

Gu, 32, and Kim Jung-hwan, who turns 38 in about a month, may not be around for the next Olympics. They'll hope to do what the two senior members of the 2012 Olympic team did for the program. And Kim said he will keep trying to help the country's sabre fencing program develop.

"These young guys are more talented than I am," Kim said. "But I can share this bit of advice with them. I've emphasized how trying to win an Olympic medal brings an entirely different level of pressure than doing so at other events. I've told them it's impossible to win a medal unless you're really driven to do so. I am sure the guys learned that here.

"I am probably not going to be in Paris, but I hope my teammates here will use this experience from Japan and win an individual gold medal there." 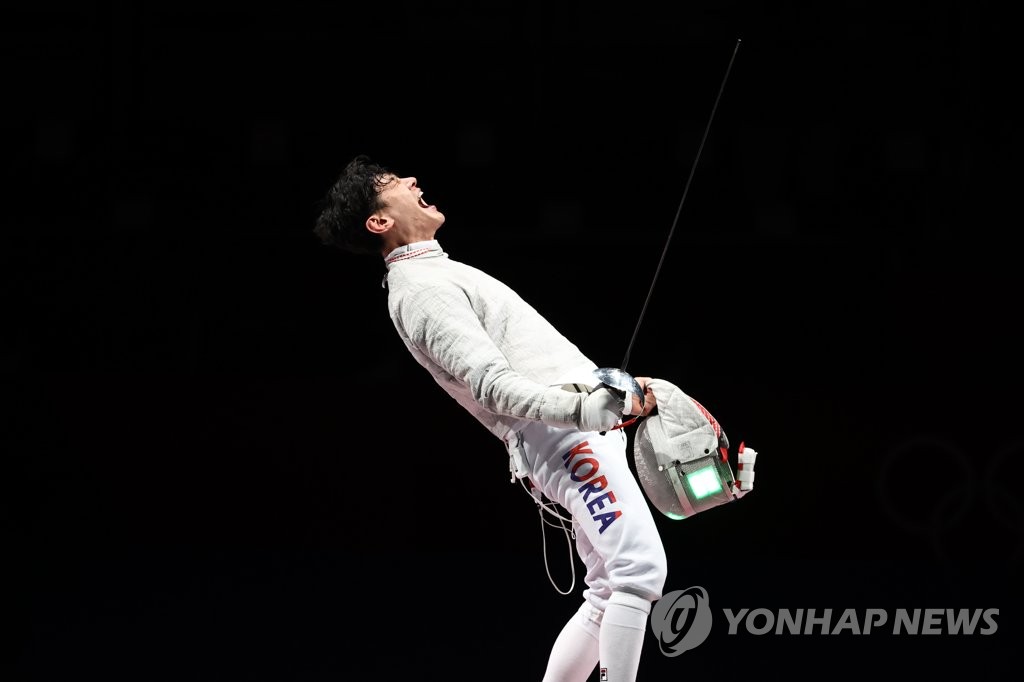