SEOUL, July 29 (Yonhap) -- Direct military communication lines between South and North Korea are back to normal operation Thursday after technical problems with one of the lines were fixed, the defense ministry said.

On Tuesday, the two sides reopened all cross-border communication lines, 13 months after Pyongyang cut them off in protest over anti-regime propaganda leaflets flying in from the South.

Of the two cross-border military hotlines, the western channel worked well from the first day, but the other one, known as the eastern line, had not been fully operational until Wednesday due to technical issues, the ministry said.

"Today, we held daily liaison phone calls with the North at 9 a.m. via both the western and eastern lines," a ministry official said. "We also exchanged information on illegal fishing boats in the Yellow Sea via the fax connected to the western communication line to prevent accidental clashes."

But the North has not answered the South's calls via ship-to-ship radio links that use the global merchant marine communication network, officials said, without further elaboration. 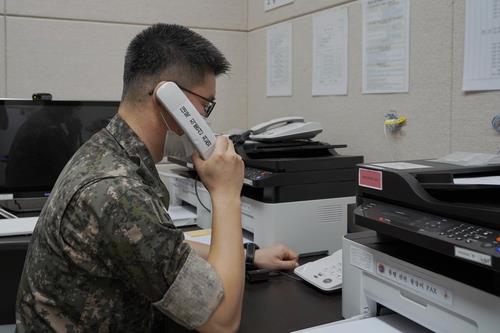