SEOUL, July 29 (Yonhap) -- South Korea and the United States are discussing when and how to stage their annual summertime military exercise, the defense ministry said Thursday, amid concerns the maneuvers could affect peace efforts involving North Korea.

The two sides usually hold their summertime exercise in August. Sources have said that this year's one is expected to kick off around mid-August for a three-week run and take the form of a computer-simulated command post exercise (CPX) without outdoor drills.

Whether and how to stage the drill has been an issue, particularly as President Moon Jae-in and North Korean leader Kim Jong-un have agreed to improve chilled relations and reopened cross-border communication lines this week, which had been severed for about 13 months.

Pyongyang has long bristled at such combined drills, branding them as a rehearsal for invasion, though Seoul and Washington have said they are defensive in nature.

"As I've repeated, the timing and scale of the summertime exercise have not yet been finalized," ministry spokesperson Boo Seung-chan told a regular briefing.

"South Korea and the U.S. have made close consultations, fully factoring in related conditions, including the fast spreading pandemic, maintenance of the combined readiness posture, the creation of circumstances for retaking the wartime operational control and supporting diplomatic efforts for the denuclearization of and a lasting peace on the Korean Peninsula," Boo added.

On Tuesday, the U.S. Department of Defense refused to comment on future exercise plans, citing policy, but noted that the allied forces continue to maintain a "robust combined defense posture to protect the Republic of Korea against any threat or adversary," while hinting that future programs may be affected by COVID-19.

The two sides usually stage major combined exercises twice a year -- around March and in August -- along with smaller-scale drills throughout the year. This year's springtime program took place in March in a scaled-back manner amid the pandemic. 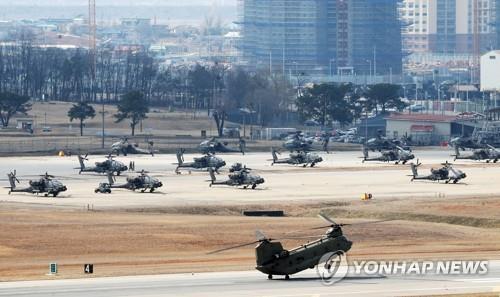 No decision yet on details of summertime S. Korea-U.S. combined exercise: defense ministry

No decision yet on details of summertime S. Korea-U.S. combined exercise: defense ministry