SEOUL, July 29 (Yonhap) -- A series of wall paintings disparaging the wife of front-running conservative presidential hopeful Yoon Seok-youl in central Seoul have become a magnet for criticism from his supporters and conservative politicians.

A train of vehicles were parked back-to-back around the outer wall of a used bookstore in Seoul's central district of Jongno early Thursday morning in a bid to cover several paintings on the wall.

The paintings drawn on six iron plates surrounding the wall were apparently depicting shady rumors about Kim Keon-hee, wife of the former prosecutor general who served under President Moon Jae-in and is running for the presidency on the opposition side.

Two of the paintings showed the face of a woman under the slogan "Julie's men. The dream of Julie! The dream of becoming the first lady!." They also listed seven high-profile men, including Yoon, Kim is rumored to have been with.

The controversial rumors spreading on the internet said Kim worked as a hostess under the alias of Julie at a nightlife establishment before her marriage with Yoon.

Kim dismissed them as unfounded in an interview with an internet news outlet last month, saying they were "attacks aimed at political profit."

Yoon's camp again rebutted the rumors, following the news of the paintings, and lodged formal complaints against 10 people suspected of spreading those rumors.

"The rumors are avowedly untrue," Yoon's camp wrote on its Facebook page, saying it will soon release relevant documents to disprove the rumors.

The camp also pressed formal defamation and other charges against 10 people, including YouTubers and journalists, for disseminating rumors about Kim. 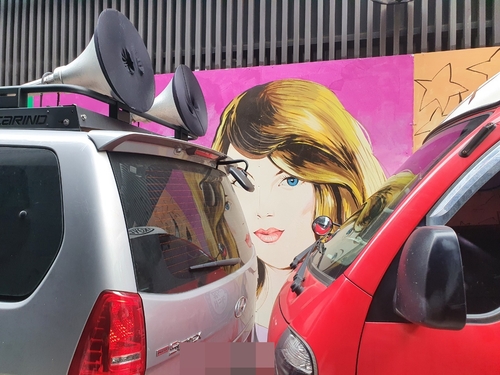 The paintings drew a group of right-wing YouTubers and supporters of Yoon to the scene, who blocked the view of the paintings and blared noisy music through a loudspeaker in protest.

"I have been covering (the wall) with cars since yesterday because I hate looking at the paintings," one of the protesters said. The bookstore also received a burst of calls from angry protesters objecting to the paintings.

It was later learned that the paintings were commissioned by the bookshop's owner, who also owns the building, out of "fury" at Yoon.

"I was told the reason why (he) did the paintings was because he was furious at Yoon saying he is running for president because the value of the Constitution was ruined," Ji Seung-ryong, an operator of a cafe chain who is a friend of the bookshop owner, wrote on social media a day earlier.

An employee at the bookstore said "we plan to continue our business as usual regardless of (protests) ... as my boss has a stance that there's no need to react to people who express different opinions because the wall paintings were put up as part of ways to express one's personal freedom."

The controversial paintings also drew supporters to the scene. "I came all the way to visit and root for (the bookstore)," one visitor told Yonhap News Agency.

There were no physical clashes between the bookstore and protesters yet, but police have been sent to guard the area in case of a collision.

Continuing allegations surrounding Yoon's wife and his mother-in-law, who was convicted of violating the Medical Service Act and fraud earlier this month, are being partly blamed for the slackening support ratings for the former top prosecutor.

According to the latest opinion poll on prospective presidential contenders released by Realmeter earlier in the day, the approval rating for Yoon came to 27.5 percent as opposed to the runner-up, Gyeonggi Province Gov. Lee Jae-myung affiliated with the ruling Democratic Party, who had 25.5 percent.

Yoon was leading the poll for many weeks, but his lead over Lee has recently narrowed or sometimes been upended. 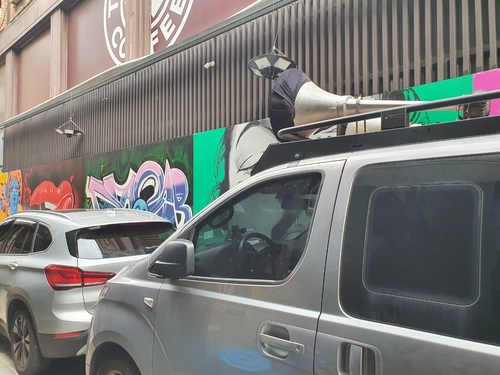 Choe Jae-hyeong, a former top state auditor who is competing to win the ticket of the main opposition People Power Party to run in the March 9 presidential election, lashed out at the paintings as "dirty violence."

"Any acts of degenerating democracy in the name of freedom of expression should not be tolerated," he wrote on his Facebook page.