SEOUL, July 30 (Yonhap) -- For Kwon Ji-young, a 41-year-old office worker, traveling overseas has been an annual ritual that allows her to completely take a break from the heavy workload of her daily life.

But since she canceled her planned 10-day trip to Austria in April last year due to the COVID-19 pandemic, she has only browsed photos taken during previous trips in a bid to recollect fond memories.

"I don't know when I can travel overseas without virus concerns," Kwon said. "If I am fully vaccinated, I may be able to do so, but I am cautious about going abroad any time soon."

The tourism industry is one of the sectors hit hardest by the pandemic as demand for overseas travel, the main source of income for travel agencies here, has dried up amid the suspension of flights and border restrictions.

The pandemic has dealt a devastating blow to travel agencies in South Korea, which had already seen slow growth in sales in recent years amid diplomatic feuds with China and Japan.

Suffering from operating losses and job cuts caused by the pandemic, travel firms claimed they are on the verge of "withering to death."

"Travel agencies are in deep slumps. Their offices have been left open, but their business operations have effectively ground to a halt," said Baeg Seung-pil, vice chairman of the Korea Association of Travel Agents (KATA).

As of end-April, the number of travel agencies was at 13,433 across the nation, down 4.6 percent from a year earlier, according to data from the state tax agency.

A KATA report showed 25.9 percent of about 17,660 registered travel firms suspended businesses or went bust as of the end of October last year.

In 2020, the country's tourism sector was estimated to have suffered 14.1 trillion won (US$12.3 billion) in losses, according to government data. Of them, the travel industry sustained about 6.4 trillion won in damage.

Kang Soon-young, who runs a small travel agency in eastern Seoul, said she turned half of her office into a laundromat last year in a desperate bid to avert business closure.

"Until things get a little bit better, I may have to endure the current situation while doing both of these jobs together," she said.

Amid the extended slumps, a glimmer of hope for the resumption of overseas travel has grown since June as the country has accelerated the COVID-19 vaccine rollout.

At least 18.3 million people have received their first shot, 35.8 percent of its 52 million population, since the country began its inoculation campaign on Feb. 26.

The country seeks to administer the first dose to 36 million people, 70 percent of its population, by September with the goal of achieving herd immunity by November.

Some countries, such as France and the Netherlands, have already exempted Korean travelers from being under quarantine upon arrival if they submit negative COVID-19 test results or are fully vaccinated. The Czech Republic has not imposed any entry restrictions on Koreans.

Adding to such optimism, the government announced a plan to push for a quarantine-free "travel bubble" agreement with Saipan, Guam and Singapore to allow overseas group tours for fully vaccinated people. The move will exempt them from mandatory quarantine upon entry into each other's territory.

The government signed a travel bubble deal with the U.S. Pacific island of Saipan in late June, becoming the first such case under South Korea's travel bubble initiative. 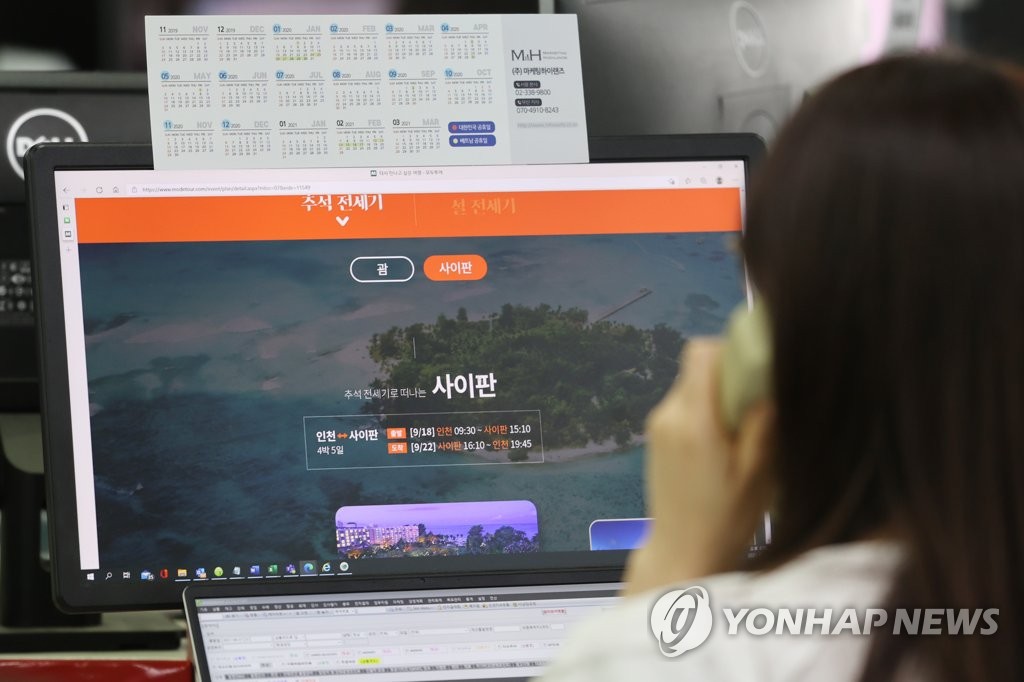 South Korean airlines resumed flights for Saipan on Saturday, with six Koreans traveling for the first time under the travel bubble program.

"When COVID-19-related restrictions are eased, such as a mandatory quarantine, the travel industry is a sector where explosive demand can be anticipated," said Ji In-hae, an analyst at Hanwha Investment & Securities Co.

But a recent flare-up in virus cases and the fast spread of the more contagious delta variant has put travel firms on edge again.

People's inquiries for overseas trips in the summer remained subdued after the government began to impose the toughest-ever virus curbs in the greater Seoul area on July 12, according to travel agencies.

"We expect demand for overseas trips to recover around the Chuseok fall harvest holiday in September," said Yook Hyun-woo, a general manager at No. 2 travel agency Mode Tour. He said reservations for group tour programs for the holiday are 30 percent booked without cancellation.

"Demand for travel will likely gradually recover if the country achieves herd immunity. But it may take two or three years for the sector to return to pre-pandemic levels," he said.

Large Korean travel companies have focused on running group tour-based programs, increasingly losing in a competition to attract young customers to travel platform operators, such as Expedia and Booking.com.

Interpark Tour also started a pilot version of the AI-based platform in June. If people select where and when to go for trips, AI recommends flights, accommodations and details about itineraries.

Baeg at KATA said he is not pessimistic about the resumption of overseas trips, as the country has revved up the vaccine rollout.

"But unless the COVID-19 pandemic is brought under control, similar to the flu, it is difficult to expect a boom in overseas trips like those seen in the past."