SEOUL, July 30 (Yonhap) -- Gulping a can of beer alone after a grueling night shift has been a monthslong ritual for Kim Jae-yeon, a nurse at a general hospital in Seoul, since her favorite watering hole shut down amid the pandemic and the hospital she works at told medical staff to avoid gatherings.

"The worst case scenario is finding my fridge empty," the 41-year-old said with a grin. "No convenience stores around my home stay open round the clock. Ensuring the stock seems to become a key to the quality of my life."

Kim could soon find an oasis as the government has allowed convenience stores to sell alcoholic beverages via vending machines on a trial basis, a sweeping deregulatory measure in a nation where only state-licensed bodies can sell liquor, in person at designated places, to only those aged 19 and older. 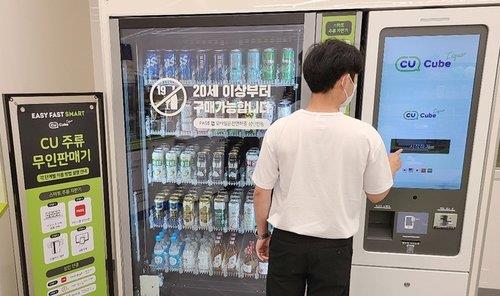 The country's first liquor vending machine was installed earlier this month in a CU convenience store at a Mount Seorak resort in Gangwon Province. The machine offers more than 40 kinds of booze, including beer, soju, wine, and traditional alcoholic beverages.

Age verification is a must before using the machine. A customer is required first to scan a driver's license with a smartphone identity authentication application, PASS, and have the machine read the scanned license to show the buyer is old enough.

Payments can be made with a credit card or a mobile device.

The door of the self-checkout machine opens when a user verifies their age and chooses a payment method. After the customer takes products out of the refrigerated stand, the door closes and the payment is automatically processed.

"Soon, I may not have to worry about whether the supermarkets in my neighborhood are closed when I come home late at night," Kim said. "I think the vending machines are particularly useful in this pandemic era, as they will help me minimize unnecessary contact with others."

Franchise owners also welcome their introduction, according to E-Mart24, as the new machines will likely help shore up sales and cut labor costs. Recently, a growing number of convenience stores have opted to stay closed or go unmanned after midnight due to minimum wage increases and the virus situation.

The introduction of liquor vending machines was made possible under the government's "regulatory sandbox" scheme designed to encourage businesses to test innovative ideas, products and services by waiving or postponing regulations on a temporary basis.

Under the benefit of the sandbox, several technology firms have won government approval for the contactless method using mobile authorization systems in liquor vending machines.

The regulatory exemption remains effective for up to four years, and the government is supposed to make a decision during the period on whether to revise the law to permanently lift those restrictions.

"We've been working to address regulatory issues," an official of the Office for Government Policy Coordination said. "The decision on each case is made through thorough review, and what we aim is to help create new business chances, give customers greater options, and devise more reasonable and sophisticated regulation schemes."

Under the regulatory sandbox program, the government approved more than 410 projects by eliminating regulations since its creation in 2019, and more than 185 items have either been officially launched or on a test run, according to the industry ministry.

But the liquor vending machines do not come without concerns.

Some raise the question of how to prevent minors from access accessing alcohol, claiming that a simple QR code or bar code scan is not nearly enough to verify the age of users. Others worry about negative impacts on public health, saying greater access to alcohol means increased use.

"This test run also takes place under tight rules. The machines must be installed at stores where surveillance cameras are set up. We also need to submit sales records every month, as well as survey results of customers and franchise owners every six months about how satisifed they are with the new system," a Shinsegae official said.

"While operating, we can also make up for potential problems by employing more advanced adult authentication means using biometric data, for example, and through additional monitoring systems," he said. 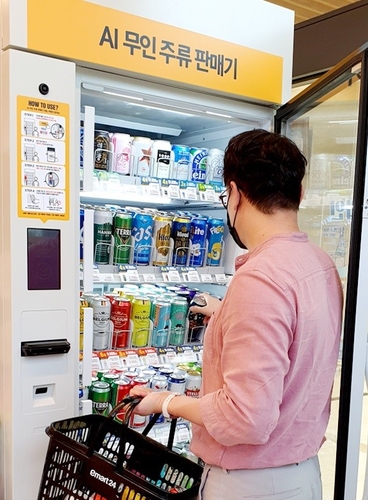