SEOUL, July 29 (Yonhap) -- A total of 261 out of 272 service members who contracted COVID-19 while on anti-piracy missions in waters off Africa have fully recovered and are expected to reunite with their families as early as this week, the defense ministry said Thursday.

All members of the 301-strong Cheonghae unit were airlifted home last week, cutting short their peacekeeping missions in Africa, after 247 service members tested positive for the new coronavirus. Fresh tests found 25 more cases, raising the total caseload to 272 as of Thursday.

Of the total, 261 individuals are scheduled to be released from medical facilities around Saturday, as doctors have judged that they are fully recovered and there are no concerns that they may transmit the virus to others, according to the ministry.

"The sailors will be in quarantine either at their homes or bases for about a week as a prevention step in accordance with health authorities' guidance," a ministry official said.

Eleven other sailors who tested positive still had symptoms and needed further treatment, he added.

Twenty-nine members who tested negative have been in isolation at a Navy facility, and they will undergo another round of virus tests Monday to exit quarantine the following day, according to the defense ministry.

"No Cheonghae unit members are in critical condition as of now. We will fully support them to help them stay healthy and return to mission," the ministry said in a release.

All of the Cheonghae unit members are expected to receive COVID-19 vaccine shots next month, officials said. None of them have been vaccinated, as they left South Korea in February, weeks before the country began the vaccination campaign.

The military has come under fire for poor initial responses to the outbreak and the failure to thoroughly implement antivirus measures for service members on overseas missions. The ministry is conducting an audit into the Joint Chiefs of Staff, the Navy and other related agencies to figure out what caused the worst-ever cluster infection in the military. 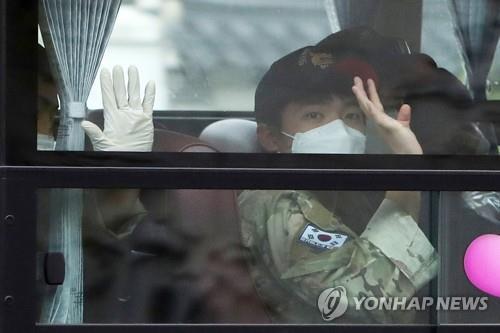