SEOUL, July 30 (Yonhap) -- A group of progressive lawmakers have condemned misogynistic attacks being leveled at a female South Korean archer now competing at the Tokyo Olympics.

An San, who set a record of winning three golds in archery at a single Olympics Friday, has recently become a target of misogynistic attacks for her short haircut.

Some male internet users flooded An's social media account with hate speech, taking issue with her past use of online slang terms, deemed misandrist by anti-feminist groups. They also made a flood of calls to the Korea Archery Association, demanding An's medals be returned.

"Unilaterally defining (another person's) thoughts based on (his or her) appearance or origin and targeting certain thoughts for indiscriminate criticism constitute an extreme case of senselessness and is tantamount to a hate crime," Rep. Woo Won-shik of the ruling Democratic Party (DP) wrote on his social media account a day earlier.

Kwon Ji-woong, a spokesman for DP presidential contender Gyeonggi Gov. Lee Jae-myung, also condemned the online attacks in a news release the previous day. "Having a short haircut and being a woman cannot be a basis for criticism. (An San) should be protected from these unfair attacks."

Rep. Sim Sang-jeung of the progressive minor Justice Party also joined in, uploading an image of her with short hair on her social media account.

"I will root for archer An San and stand with her on the 'short cut line,'" Sim said, urging the Korean Sport & Olympic Committee to sternly respond to any "unfair pressure" on athletes.

As the controversy continued, thousands of posts were uploaded on the online bulletin of the Korea Archery Association, calling on the organization to provide protection to the 20-year-old archer. 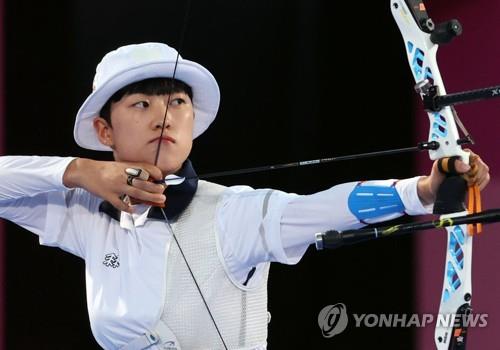 The Ministry of Gender Equality and Family also denounced the misogynistic attacks on An as well as recent disparaging claims made against the wife of conservative presidential contender Yoon Seok-youl.

"Under any circumstance, there shouldn't be any misogynistic expression or acts that violate human rights," the ministry said in a statement texted to reporters. "We're carefully watching situations where excessive slander of specific individuals continues ... These should not take place now or onward."

The controversial rumors spreading on the internet said Kim worked as a hostess under the alias of Julie at a nightlife establishment before her marriage to Yoon.

Kim and Yoo's camp dismissed them as unfounded and the latter lodged formal complaints against 10 people suspected of spreading those rumors.