(ATTN: UPDATES throughout with rally taking place in afternoon; CHANGES headline and photo)

CHUNCHEON, South Korea, July 30 (Yonhap) -- A major umbrella labor union on Friday pushed ahead with its planned rally in Wonju, central South Korea, in defiance of COVID-19 restrictions and repeated warnings from police.

The rally organized by the Korean Confederation of Trade Unions (KCTU) began at 1:50 p.m. outside the National Health Insurance Service (NHIS) building in the Gangwon Province city about 130 kilometers southeast of Seoul.

During the rally that lasted about one hour and 20 minutes, around 100 KCTU members and other participants demanded that the NHIS directly hire its call center workers rather than through a third party.

The militant labor group staged a similar rally at the same location a week ago. At that time, the city government of Wonju issued an administrative order that banned demonstrations of more than one person as part of measures to contain the spread of the virus. 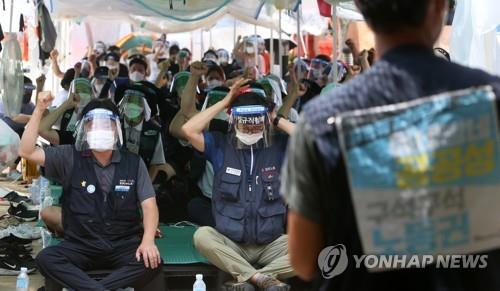 Police asked rally participants to disband, citing the Infectious Disease Control and Prevention Act. But KCTU officials refused to comply, saying they will face punishments. They also contended that they have freedom of assembly and a massive pro-labor rally hosted by the KCTU in downtown Seoul on July 3 has not led to any COVID-19 infection among its participants.

Earlier on Friday, the Gangwon Police Agency warned it will use its full force and equipment to block people from gathering, as the number of protesters could grow following a visit by KCTU leaders in the afternoon.

The agency said the rally would be in violation of the Infectious Disease Control and Prevention Act as the city government's no-assembly order is in effect. The sit-in is also a breach of the Assembly and Demonstration Act as it was not previously reported to the police, the agency noted.

The KCTU is currently under investigation over last week's rally.