U.S.-based Cardinal One Motors, SM Group and Edison Motors Co. confirmed they joined the race to acquire the financially troubled carmaker to expand their business portfolios.

K-pop Motors Co., which mainly produces electric scooters, and pharmaceutical firm Park Seok-jeon & Co. reportedly submitted LOIs. In April, the two companies formed a strategic partnership to acquire SsangYong. They could not be reached for comment.

SsangYong did not provide names of the nine companies, citing the confidentiality agreement with the potential investors.

But HAAH recently filed for bankruptcy due to rising U.S.-China tensions and the former HAAH chairman said he set up Cardinal One Motors to push ahead with the plan to acquire SsangYong.

"All the assets we bring to SsangYong, particularly our depth of auto experience, can help in the rehabilitation in Korea and expand sales through North America to (attain) SsangYong's highest achievement in its history," Hale told Yonhap News Agency via email.

The number of direct SsangYong jobs and indirect jobs should grow since our plan will more than double SsangYong's volume in three years, he said. 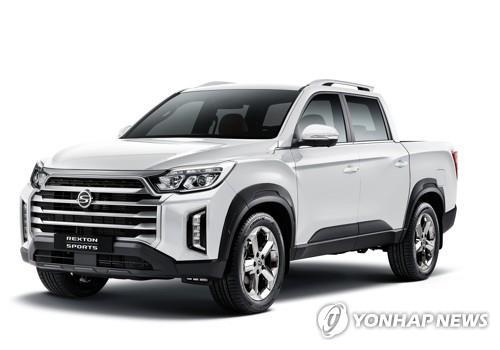 Edison Motors has formed a consortium with the Keystone private equity fund and two other financial investors to join an upcoming auction to take over SsangYong, the company said in a statement.

The company said another homegrown equity fund, the Korea Corporate Governance Improvement (KCGI), may participate in the consortium.

SM Group said Friday it has an interest in taking over SsangYong to diversify its business portfolio, which ranges from construction to shipping and auto parts manufacturing.

"Most of the companies that have submitted LOIs have plans to invest in electric vehicles and it will help SsangYong transform itself into an environment-friendly carmaker," SsangYong said.

SsangYong's Indian parent, Mahindra & Mahindra Ltd., had been in talks with HAAH to sell its majority stake in the Korean unit since last year as part of its global reorganization plan amid the COVID-19 pandemic.

HAAH was expected to submit its LOI to the Seoul Bankruptcy Court by March, but it did not send the documents, raising doubts about its intention to invest in SsangYong.

As for the failure to submit an LOI, Hale said the company needed more time to look into SsangYong's financial details before making an investment decision.

In April, SsangYong was placed under court receivership for the second time after undergoing the same process a decade earlier.

From January to June, SsangYong sold a total of 40,134 vehicles, down 19 percent from 49,387 units a year earlier. Its lineup consists of the Tivoli, Korando, Rexton and Rexton Sports SUVs.

The company also plans to sell its current Pyeongtaek plant, 70 kilometers south of Seoul, in three to five years, and it will build a new factory to focus on electric vehicles in the same city.