TOKYO, Aug. 1 (Yonhap) -- By losing to the United States on Saturday night to finish in second place in its group in the Tokyo Olympic baseball tournament, South Korea set itself up for a potentially thorny path to the final.

But how? Well, it's complicated.

Six teams in the baseball competition here were divided into two groups. In Group A, Japan, the Dominican Republic and Mexico finished 1-2-3. The rankings in Group B went the United States, South Korea and Israel.

In the knockout stage, the first three games will feature teams that ranked in the same position in their respective groups. So it will be Japan vs. the U.S., the Dominican Republic vs. South Korea, and Mexico vs. Israel. 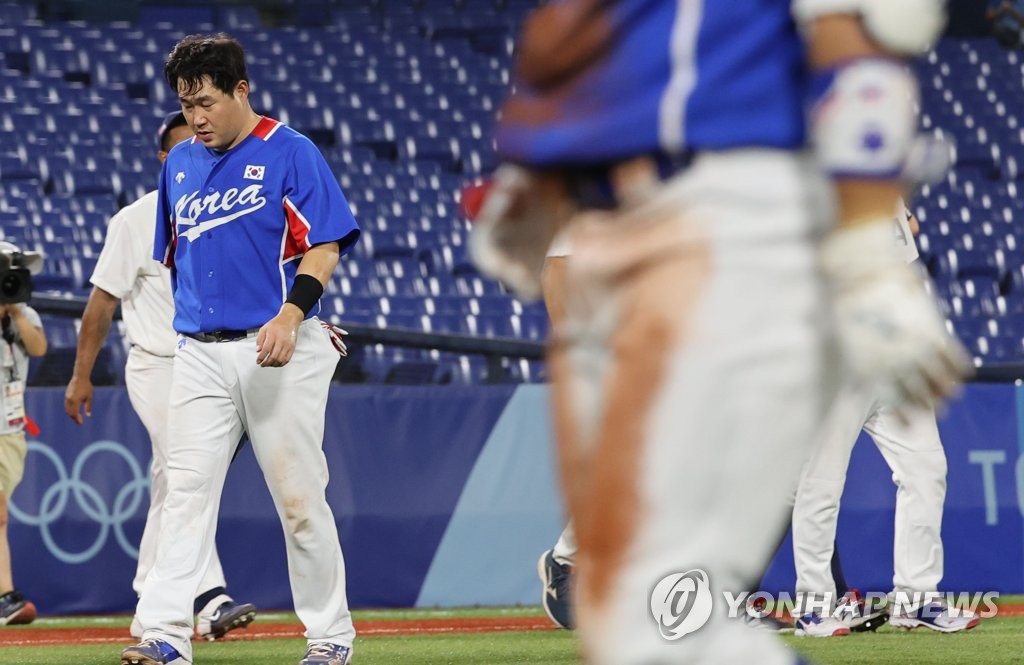 And this is where things start to get messy.

The loser of the game between the two No. 3 seeds, Mexico and Israel, will be sent home. And the winner of that game will go on to play the winner from the South Korea-Dominican Republic game.

But what happens to the loser of that Korea-Dominican Republic game? The simple answer is that the losing team will still be alive.

For the sake of explanation, let's say Mexico and South Korea win their respective games. In that case, Israel will be gone, but the Dominican Republic will move to the repechage round.

South Korea and Mexico will play each other next. The winner will advance to the semifinals. The loser will drop to the repechage round to play the Dominican Republic.

Let's say South Korea beats Mexico. South Korea will be in the semifinals, and Mexico will drop down to the first repechage game against the Dominican Republic.

Meanwhile, the winner of the U.S.-Japan game will also advance to the semifinals. And the loser of that game will play the winner from the Mexico-Dominican Republic game in the second repechage game.

To illustrate the point, let's say the U.S. beats Japan, and Mexico prevails over the Dominican Republic.

Then it will be South Korea against the U.S. in one semifinal game. If South Korea gets its revenge and defeats the U.S, then South Korea will be in the gold medal game.

Japan, in this scenario, will play Mexico in the second repechage game. Let's assume Japan beats Mexico in that game.

If you're still following us, there's still life for the U.S. Based on the above scenario, the U.S. will face Japan in the other semifinal game.

If Japan wins, then it will set up the Korea-Japan showdown for the gold medal.

The U.S., meanwhile, will move on to the bronze medal game against Mexico.

By losing to the U.S. 4-2 on Saturday, South Korea will now have to play an extra game just to have a chance to defend its gold medal from 13 years ago.

The bracket is complicated because it's a six-team tournament that doesn't render itself suitable to a traditional, one-and-done knockout style.

This is a double-elimination format, in which a team is still alive until it loses two games.

And of course, there is a straightforward solution to avoid all the headaches.