Choi has been taking necessary steps for a U.S. trip expected sometime in September, such as receiving a COVID-19 vaccine and filing a request for exemption from coronavirus quarantine, ministry officials said.

"A trip to the U.S. by the vice minister is part of efforts to follow up on the May summit between the South and the U.S., and to form a consensus on North Korea policy after the inter-Korean communication lines were restored recently," a ministry official said.

Last week, the North restored four hotlines with South Korea that it had cut off in June last year in anger over anti-Pyongyang propaganda leaflets that activists in South Korea have sent across the border into the North.

The restoration was made under agreement that South Korean President Moon Jae-in and North Korean leader Kim Jong-un reached after exchanging a series of personal letters, and raised hope for a new round of detente between the two sides.

Since the restoration, the South has made an official proposal to the North to discuss setting up videoconferencing systems for inter-Korean talks amid the pandemic while trying to determine the issues that need to be discussed with Pyongyang.

The unification ministry has been enhancing direct communication with the U.S.

Choi's envisioned trip, if realized, would make him the first senior unification ministry official to travel to the U.S. since the pandemic broke out. 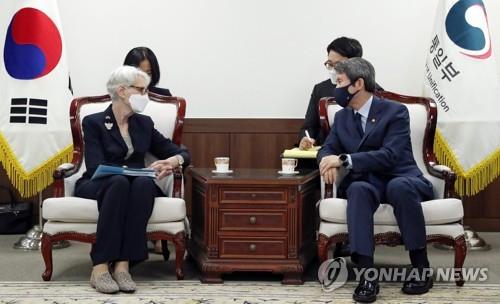