Kia has received over 30,000 preorders for the EV6 in the domestic market, and a combined 8,800 preorders in Europe and the United States, the company said. 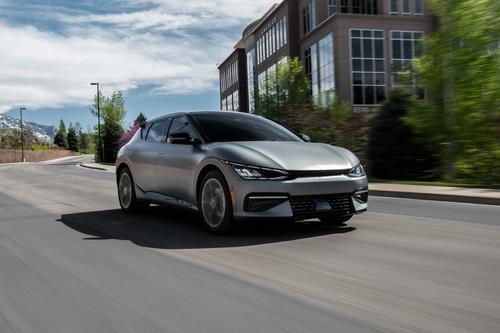 The maker of the K5 sedan and the Sorento SUV aim to sell 13,000 units of the zero-emission model on its home turf and 17,000 units in overseas markets this year.

The model is available with two kinds of battery packs -- a standard 58-kilowatt-hour (kWh) battery pack and a long-range 77.4-kWh one. The 58-kWh and 77.4-kWh models can travel up to 370 kilometers and 475 km, respectively, on a single charge.

Kia also plans to introduce sedans, SUVs and multipurpose vehicles based on the new EV platform for the next seven years.

It plans to beef up its EV lineup with 11 models, including the seven E-GMP-based ones, by 2025.

With its strengthened EV lineup, it aims to achieve a 6.6 percent share of the global battery-powered EV market by 2025 and global annual sales of 500,000 units by 2026.

Kia's current EV market share is not available as its EV sales accounted for only 1 percent of its overall sales in 2019.