A total of 272 sailors of the 301-strong Cheonghae Unit tested positive for COVID-19 last month and all of the unit members returned home weeks ahead of schedule. The government's failure to vaccinate them before their overseas deployment has been blamed for the mass infection.

"Twenty-nine members who tested negative are expected to exit quarantine on Tuesday if new tests confirm that they are virus-free. Upon release, they will receive their first dose of COVID-19 shots," a defense ministry official said.

Of the confirmed cases, 265 individuals were released from medical facilities on Saturday, and they will be inoculated starting next week after undergoing a weeklong quarantine as a preventive step, the officials said, adding that the remaining seven are still in treatment.

The Cheonghae unit members left South Korea in February, weeks before the country began the vaccination campaign. Many say the government should have been more active in seeking ways to inoculate overseas troops.

Among 1,010 troops on overseas missions, around 95 percent have received at least one dose of the COVID-19 vaccine up until now, including most of the 35th batch of the Cheonghae unit, which left the country in June as a replacement, according to the defense ministry.

The ministry began its vaccination program for troops in March and is in the final stage of fully inoculating troops aged 30 and older. It also plans to begin administering second doses of vaccine to those in their 20s this month.

Meanwhile, the military reported a new COVID-19 case on Monday, as an Army cadet in the southwestern city of Iksan tested positive, bringing the total caseload among the military population to 1,505.

Nationwide, the country added 1,219 COVID-19 cases Monday amid the fourth wave of the pandemic that has continued for weeks. 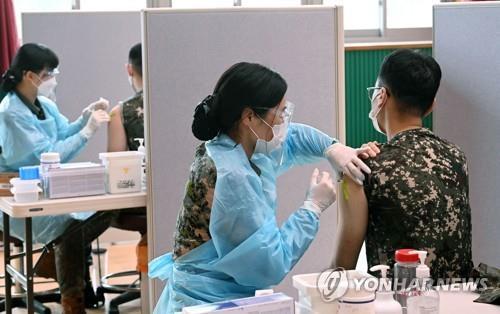