Yoon, who resigned in March as prosecutor general over an extended feud with the ruling bloc over prosecution reform, signed up with the PPP on Friday after having campaigned as an independent for about a month. The PPP leadership and key members courted Yoon to join the party to run as its candidate thanks to his favorable poll numbers.

With Yoon now having to compete in the party's in-house primary competition, the prosecutor-turned-politician is seen as moving swiftly to broaden his connections and influence within the PPP, as the party's wide field of more than 10 officially declared and prospective hopefuls portends a fiery primary competition in the coming months.

As an apparent gesture of courtesy and respect to the party, Yoon's first PPP-related public schedule came in the form of a lecture offered to a study group of party's freshmen lawmakers Monday, sharing his policy visions and recollections from traveling on the campaign trail across the country for a little over a month.

Currently, first-term lawmakers make up for the biggest group among the party's National Assembly members, with 57 out of the total 103 sitting members being freshmen legislators. 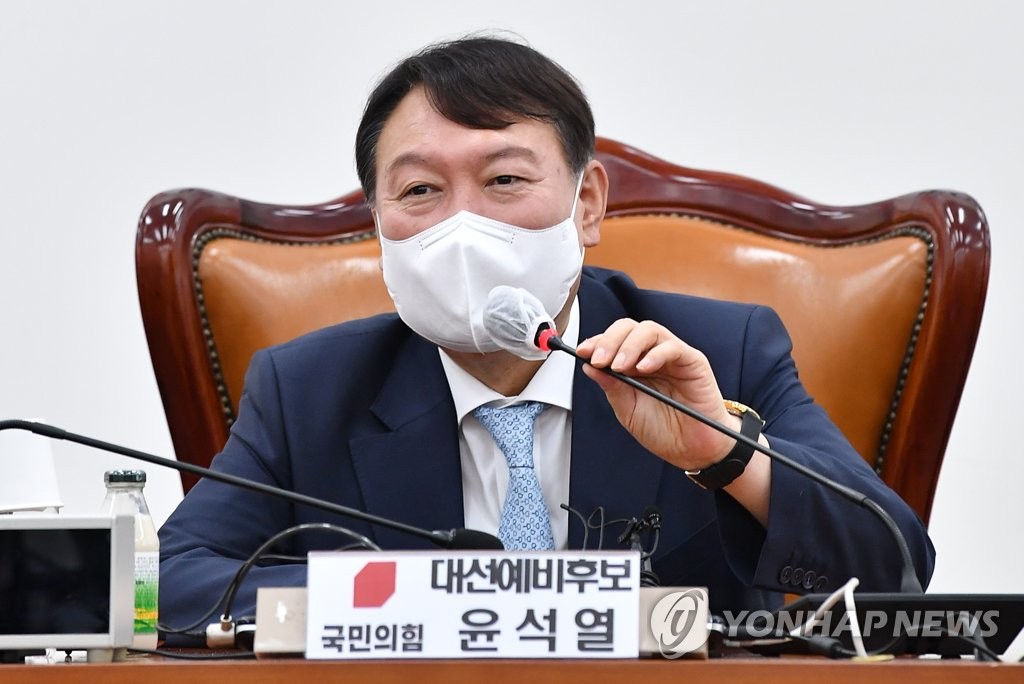 "It feels as if I'm truly starting politics after having become a member," Yoon told the group. "I have learned how regulations of extreme shock can make the lives of people difficult."

Yoon's own election team is also reportedly considering launching a campaign aimed at doubling the number of registered PPP members, by focusing on inviting new affiliations among young voters in their 20s and 30s, and middle-of-the-road swing voters.

The idea of the candidate himself hitting the streets to engage with voters in person and recommend signing up with the PPP is also reportedly being considered.

Since his debut in politics, Yoon has consistently emphasized the need to reach out to young and moderate voters in order to achieve a change of government in next year's election.

By increasing the number of members in such age groups, Yoon apparently aims to not only broaden the overall political horizon of the PPP but also effectively expand the share of his supporters who could help him in the primary competition down the line.

Yoon also made a courtesy call on the PPP leadership on Monday, as his party registration last week was announced in the absence of Chairman Lee Jun-seok and floor leader Rep. Kim Gi-hyeon at the PPP headquarters.

Lee thanked the former prosecutor general for "getting on board the (party's) primary bus" and asked for his contribution in seeking a change of government by competing fiercely and fairly in the PPP's upcoming presidential ticket primary.

Yoon replied by promising to "give my all to ensure a firm change of power together with the wide variety of people seeking a change of government."

The former prosecutor general soon plans to hold separate meetings with second-and-third-term PPP lawmakers to ask for their support in his campaign. According to his campaign team representative, Yoon also seeks to extend his contacts with political seniors as well, including former interim chief Kim Chong-in.

Yoon's campaign team is also expected to see a substantial increase in manpower, as PPP members who supported Yoon previously as an independent can now openly support him without concerns of violating the party's internal regulations.