SEOUL, Aug. 2 (Yonhap) -- Four South Koreans who were kidnapped in waters off West Africa about two months ago have been freed, following the release of another Korean national in a separate abduction in the same region, the foreign ministry said Monday.

The four were released at 10 p.m. Sunday (Korea time) after being abducted by an apparent group of pirates while aboard a fishing boat near the Gulf of Guinea on June 1. They all remain in good shape, the ministry said.

"They are under protection at a safe place that a local diplomatic mission has offered and will depart for home upon the completion of administrative procedures and flight reservations," the ministry said in a press release.

The release of the sailors came after a Korean sailor on another fishing boat and his four other foreign shipmates were set free on June 29 after having been kidnapped near the Gulf of Guinea on May 20.

The latest incidents came as Seoul has been stepping up calls for Korean seafarers to avoid operating in the treacherous waters off West Africa, which account for the vast majority of maritime kidnappings worldwide.

Last year, Seoul sent a Coast Guard official to Ghana to better protect its citizens in the piracy-ridden waters while the authorities have sought legal measures to restrict fishing operations in high-risk waters.

"We would like to stress that the government's efforts to prevent the repeated kidnappings around the Gulf of Guinea are limited, and that there is a need for our citizens and related industries to cooperate by refraining from entering high-risk maritime areas," the ministry said. 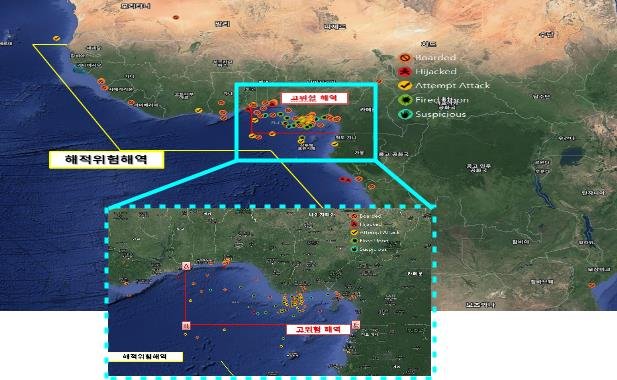