SEOUL, Aug. 2 (Yonhap) -- Around 560 billion won (US$485.8 million) was slashed from this year's defense budget to fund an extra budget in the wake of the pandemic, but the measure will not affect the country's major arms procurement plans, the defense ministry said Monday.

Last month, the National Assembly passed a 34.9 trillion-won extra budget bill aimed at propping up the economy battered by the pandemic and to support smaller businesses.

For the measure, 562.9 billion won earmarked for 22 defense projects has been slashed, including the introduction of F-35A fighter jets and the improvement of Patriot missiles, sparking concerns over the possible impact on the country's defense capabilities.

"The budget cut does not affect our plan for the operational deployment (of F-35A fighters). No changes will be made due to the extra budget bill," defense ministry spokesperson Boo Seung-chan said in a regular briefing.

The curtailment was related to foreign exchange profits and some delays in administering the budget within this year amid the virus situation, Boo said, adding the ministry will work to make up for the reduction next year to carry out those projects without a hitch.

South Korea began bringing in the advanced stealth fighters in 2019 to beef up air defense capabilities under a plan to deploy 40 units through this year.

Last year, the government cut around 1.77 trillion won from the defense budget to fund extra budget plans amid COVID-19. 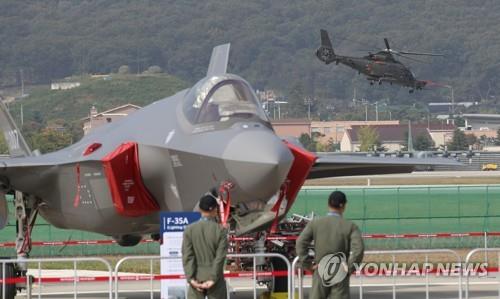