(ATTN: UPDATE with reaction from journalist association in last 3 paras)

SEOUL, Aug. 2 (Yonhap) -- A controversial media reform bill being pushed by the ruling Democratic Party (DP) is running into fierce resistance from the opposition bloc, putting the rival parties on a possible collision course at the National Assembly.

Having unilaterally passed the bill through a subcommittee of the parliamentary Culture, Sports and Tourism Committee last week, the DP aims to advance it through the National Assembly in the upcoming provisional parliamentary session later this month.

The bill aims to revise the Act on Press Arbitration and Remedies, Etc. for Damage Caused by Press Reports in a way that sharply increases the media's burden of responsibility for false or fake news.

The revision proposal primarily aims to multiply the level of punitive compensation for damage from the release of "deliberate" or "grossly negligent" false news reports by up to five-fold in a bid to curb dissemination of misleading news.

The main opposition People Power Party (PPP) has denounced the bill as aimed at "gagging the press" and is escalating its campaign against it.

"The move to install a new clause (mandating punitive compensation for fake news) ... explicitly displays an intention to censor and control the media," Rep. Kim Gi-Hyeon, PPP's floor leader, said in a meeting of the party's supreme council earlier in the day.

The floor leader claimed the hidden purpose of the bill is to block any news on corruption allegations involving those in the power in the final year of the Moon Jae-in administration.

Another PPP official said the party will continue to rally against the bill vis-a-vis the DP's planned advancement of it through the National Assembly, portending heated bipartisan wrangling in the upcoming August provisional session of the assembly.

Commanding a majority of 171 of the National Assembly's 300 seats, the DP currently has power to legislate on its own, with or without support from opposition parties.

The DP remains adamant about the necessity of the revision.

"A decline in fake news will drive up the freedom of people ... Opposition parties also need to join hands in passing the bill that could expand the freedom of both the press and the entire nation as well," DP floor leader Yun Ho-jung said during a party meeting Friday. 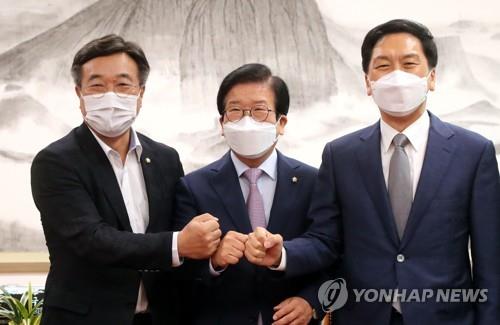 The bill, however, has drawn criticism from media organizations, including Kwanhun Club, an association of senior journalists, the Journalists Association of Korea and the National Union of Media Workers.

"We concluded that the revision ... could exert a profound impact on the future of our society's journalism and people's right to know," Kwanhun Club said in a statement released Monday.

"The bill has a high chance of discouraging the media's fact-finding and reporting functions such as investigative journalism and qualification verification for candidates (for public offices)."

Such a "weakening" of the media's role in keeping politicians, high-level government officials and wealthy figures in check will generate a boomerang effect on the public by stoking injustice and corruption, it stressed.