YOKOHAMA, Japan, Aug. 2 (Yonhap) -- For the first four innings against Israel in the second-round game of the Tokyo Olympic baseball tournament Monday, South Korea was experiencing much the same problem that had ailed the team in their three previous games.

Granted, South Korea had won two of those games, but at some point, its inability to cash in on one scoring opportunity after another could come back to bite. 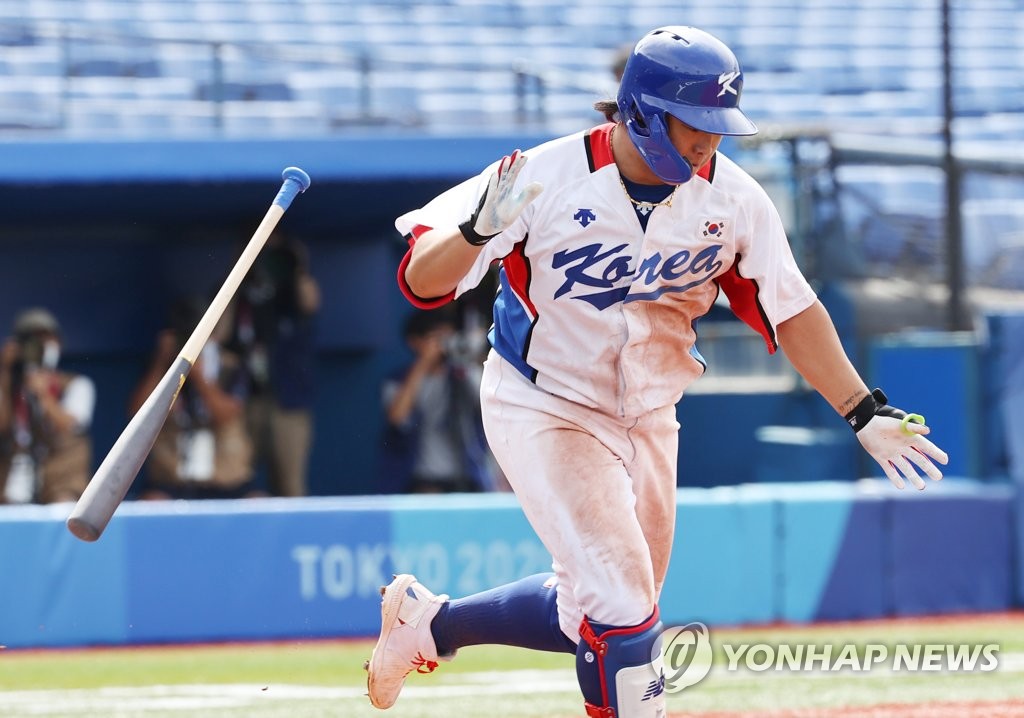 Would that happen in this game? South Korea took a 3-0 lead early but then Israel got a run back in the top of the fifth, after South Korea had frittered away multiple chances to extend its lead.

And almost casually, South Korea put up a seven-spot in the bottom of the inning, en route to an 11-1 victory.

South Korea, the defending Olympic baseball champion, is now in the semifinals on Wednesday, awaiting the winner of the United States-Japan game set for later Monday.

Two days later, South Korea scored first against the U.S., only to lose 4-2, managing to get only five hits and striking out 14 times.

Then against the Dominican Republic on Sunday, South Korea trailed 3-1 heading into the bottom of the ninth. An unexpected explosion of three quick runs gave South Korea a 4-3 win. But after outhitting the Dominicans 12-6, South Korea shouldn't have needed the ninth-inning heroics for that victory.

A similar script played out in the early going Monday. 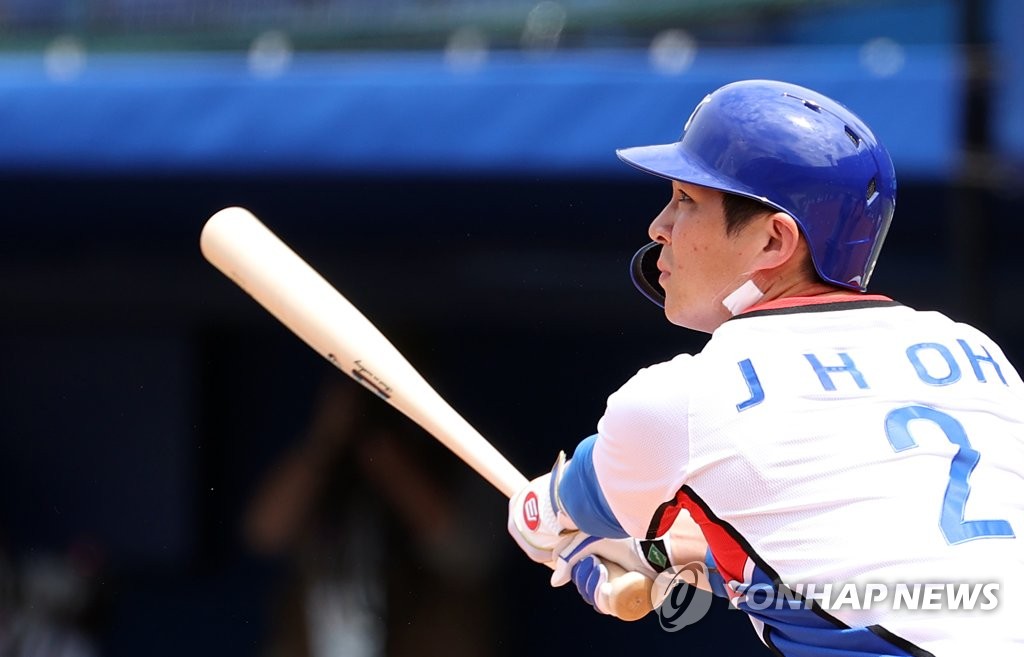 The first two South Korean batters each hit singles against starter Joey Wagman, who experienced control problems from the beginning. But South Korea only got one run out of that rally, courtesy of a sacrifice fly by Lee Jung-hoo.

Kim Hyun-soo doubled off the center field wall in that same inning, but Kang Baek-ho, not exactly a speedster, got thrown out at home.

Oh Ji-hwan's two-run homer in the bottom of the second gave South Korea a 3-0 lead, but South Korea couldn't add to that lead despite loading the bases with one out later that same inning.

South Korea had runners at second and third with two outs in the third, only to see Hwang hit a groundout to shortstop.

A walk and a single to start the fourth inning, Park Hae-min got caught in a rundown between second and third, after Lee Jung-hoo missed on a sacrifice bunt attempt. An infield single gave South Korea two runners again, but Kim Hyun-soo struck out swinging against new pitcher Alex Katz. 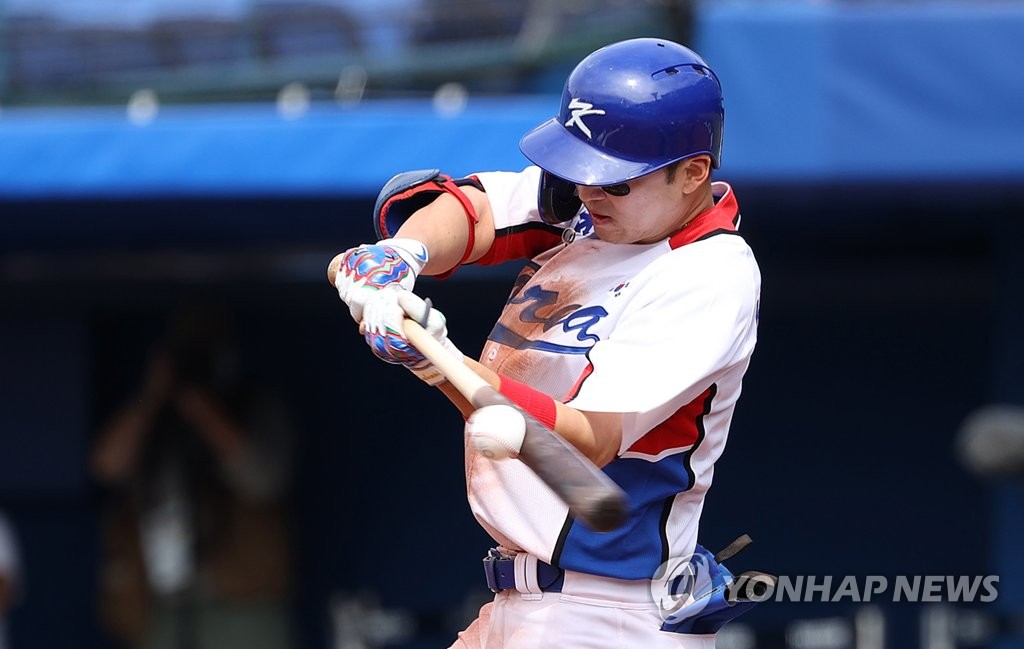 But it was against Katz that South Korea finally got the mojo flowing in the bottom of the fifth. An errant throw home by first baseman Danny Valencia gave South Korea its first run of the big inning. Then Park Hae-min's two-run double and Kang Baek-ho's two-run single put South Korea ahead 8-1 and chased Katz from the game.

The game ended on the mercy rule in the seventh inning when Kim Hye-seong drove in the 11th run to give South Korea a 10-run lead. By then, South Korea looked like a different team, fully renewed and energized despite playing a day game after a night game.

Kang Baek-ho, who went hitless as the cleanup hitter in the first two games, batted 4-for-4 in his second game from the No. 2 spot.

Kang said he'd always dreamed of batting cleanup for the national team. He didn't necessarily feel any pressure but he just wanted to show manager Kim Kyung-moon that he'd made the right choice.

"Veteran guys here have told me they'll always have my back and I should just go and do my thing," Kang said. "That has helped me so much."

South Korea enjoyed a walk-off, 4-3 victory over the Dominican Republic late Sunday night, and had a quick turnaround for a noon start on Monday. Kang said fatigue was never an issue.

"I was a bit sore in the morning, but we all knew the importance of this game. No one felt tired today," he said. "It's great to get this win. We'll be ready for our next game Wednesday."

Leadoff Park Hae-min went 2-for-2 with three walks and two RBIs. Four other players had at least two hits.

Oh Ji-hwan wasn't among those players, but his lone hit was a two-run shot in the second inning. He had also homered against Israel in their preliminary game last week.

South Korea trailed Israel 4-2 through six innings in that game, and Oh said he didn't want to put his team in a hole in the rematch.

"We didn't want to fall behind again, and so we concentrated hard from the start," Oh said. "We wanted to build a big lead as early as possible." 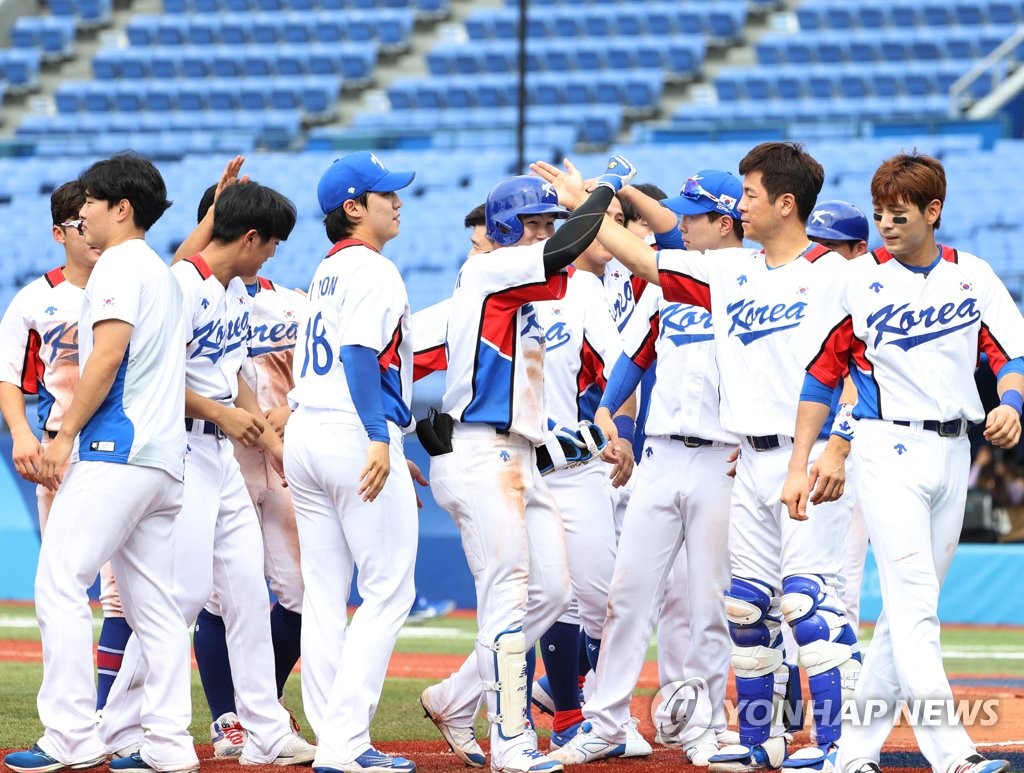