Lee, who served as president from 2008-2013, was admitted to Seoul National University Hospital in central Seoul last Tuesday for treatment of a chronic disease.

The 80-year-old Lee was discharged from the hospital in the day according to the opinion of the medical staff and returned to Anyang Prison, just south of Seoul, the Ministry of Justice said. 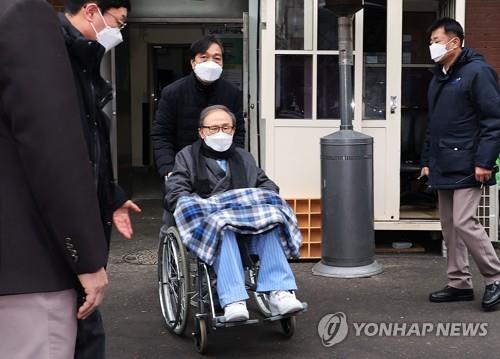 It was his third temporary leave from the prison for medical issues following brief hospitalizations in December last year and April.

The Supreme Court confirmed Lee's prison term of 17 years, a fine of 13 billion won (US$11.3 million) and a forfeit of 5.78 billion won in October last year for embezzling 25.2 billion won from corporate funds of DAS, an auto parts company that he effectively owned, and accepting bribes totaling 9.4 billion won from companies, including Samsung Electronics Co.