Trading volume was moderate at about 554 million shares worth some 10.1 trillion won (US$8.8 billion), with losers outnumbering gainers 501 to 329. 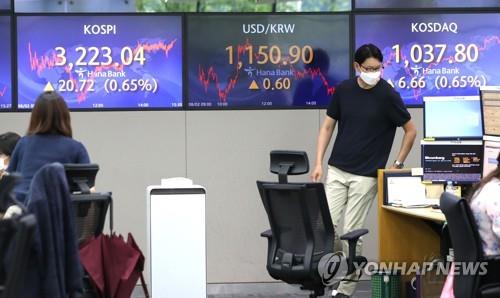 Stocks got off to a bullish start as South Korea's July exports jumped 29.6 percent on-year to a record high amid high demand for chips and autos.

The stock index pared its gains in the late morning, however, taking a cue from the overall retreat in the Asian markets, including Hong Kong and China.

The KOSPI briefly retreated below the 3,200-point level in the wake of China's move to overhaul its tech firms and property markets. But stocks bounced back to gains, tracking the Chinese stock rebound.

The local currency closed at 1,150.9 won against the U.S. dollar, down 0.6 won from the previous session's close.

Bond prices, which move inversely to yields, closed lower. The yield on three-year Treasurys rose 1.8 basis points to 1.435 percent, and the return on the benchmark five-year government bond added 1.5 basis points to 1.653 percent.