"The hiring process has been going on," and the final decision will be made as early as next week, an official at the university said.

She served as the first foreign minister under President Moon Jae-in and was the country's first woman to lead the ministry. She served in the position for three years and eight months after her appointment in June 2017. She resigned in February.

In the early stages of her career, Kang worked at the Korean Broadcasting System's news bureau and lectured at universities.

In 1998, she joined the ministry as the acting senior research officer of the Institute of Foreign Affairs and National Security.

Kang, 66, is known for her experience in human rights and global assistance at the United Nations, having held high-level positions at the intergovernmental organization for many years. 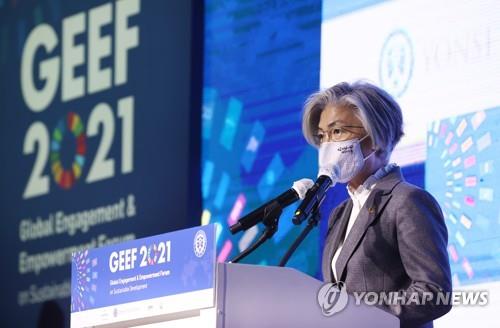