SEOUL, Aug. 3 (Yonhap) -- A pair of paintings disgracing the wife of leading conservative presidential hopeful Yoon Seok-youl have been whitewashed from the walls of a bookstore in central Seoul after they drew criticism of misogyny.

Two paintings on the outer walls of the used bookstore in the district of Jongno were covered over in white paint Monday afternoon a few days after grabbing headlines for their disparaging depiction of Kim Keon-hee, wife of the former prosecutor general currently leading most presidential opinion polls.

They were among the six paintings drawn recently on the bookstore's walls in apparent reference to internet rumors about Kim.

The controversial paintings depicted the face of a woman called Julie, the alias Kim is rumored to have used before her marriage with Yoon, and listed the names of several high-profile men she is rumored to have had relations with.

The paintings sparked fierce criticism from women's rights groups, politicians and Yoon's supporters for their misogynistic attack on a woman's private life. 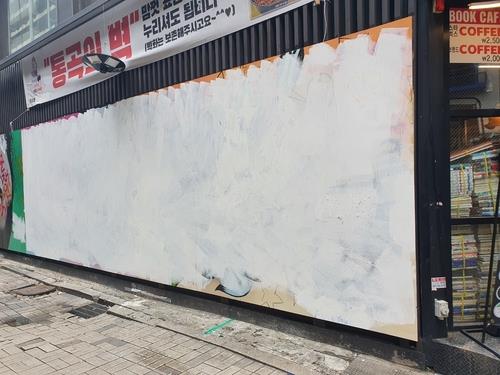 The bookstore's owner, surnamed Yeo, who commissioned the paintings, told Yonhap News Agency that he ordered the removal of the controversial paintings due to "too much fuss" over them.

"We did not put up the paintings with political motives or under external influence, but, because of all the people creating a scene in front of the bookstore, the employees had to go through such a difficult time," he said.

Over the weekend, the bookstore covered up all of the paintings' controversial phrases in white paint, but the controversy did not subside.

In the process, the bookstore's side lodged formal charges against several YouTubers for obstructing its business and defaming its operators.

A civic group has also formally accused the bookshop owner of defamation.