SEOUL, Aug. 3 (Yonhap) -- K-Bank, South Korea's first internet-only bank, said Tuesday it turned a profit for the first time since its inception in the second quarter of the year on robust growth in customers and deposits.

Net profit stood at 3.9 billion won (US$3.4 million) in the April-June period, a sharp turnaround from a net loss of 12.3 billion won three months earlier, K-Bank said in a regulatory filing.

It represents the online lender's first quarterly profit since its launch in April 2017.

In the first half of the year, K-Bank registered a net loss of 8.4 billion won, compared with a deficit of 44.9 billion won a year earlier.

Industry sources attributed K-Bank's switch to profit in the second quarter to a drastic rise in the number of customers and the value of deposits.

The number of its customers came to 6.19 million as of the end of June, 4 million more than six months earlier. The figure totaled 6.28 million as of end-July.

K-Bank's loan delinquency ratio came to 0.37 percent as of end-June, down from 2.36 percent from a year earlier.

The lender's capital adequacy ratio, a key barometer of financial soundness, reached 10.9 percent as of end-June. The ratio measures the proportion of a bank's capital to its risk-weighted assets.

K-Bank is controlled by a consortium of telecom giant KT Corp., Woori Bank and 19 other companies. In 2017, South Korea permitted two internet-only banks -- K-Bank and Kakao Bank -- to offer services around the clock in an effort to inject more competition into the banking sector. 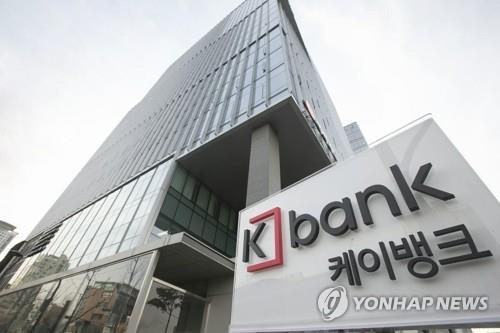