On the men's side, world No. 4 Jun Woong-tae is as strong a medal contender as South Korea has had. He won the 2018 Asian Games gold medal and also has four world titles -- two each in the team event and the relay -- to his credit. 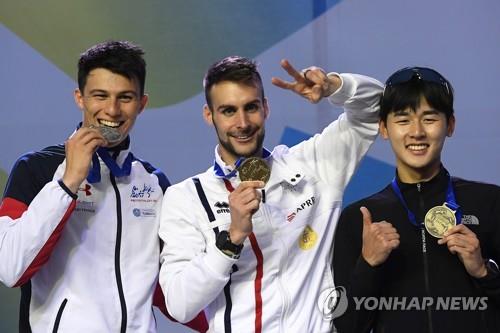 No South Korean has won an Olympic medal in modern pentathlon. Jun, 26, rose to unexpected prominence before the 2016 Rio de Janeiro Olympics by winning a World Cup event organized by the International Modern Pentathlon Union (UIPM) earlier that year.

But Jun got off to a dismal start in the fencing portion at the Olympics, notching only 13 victories while leaders had over 20 victories. Despite setting an Olympic record in the laser run with 11:02.50, Jun only finished in 19th place overall.

Jun has since developed into a viable medal contender. He finished the 2018 season ranked No. 1 in the world and was named the year's top athlete by the UIPM. He punched his ticket to the Olympics by winning bronze in the individual event at the 2019 world championships.

Though most of the international events, including the Olympics, were wiped out last year due to the COVID-19 pandemic, Jun has remained sharp. He won a World Cup title in April in Bulgaria over other Olympic medal hopefuls, such as Joseph Choong of Britain. Adam Marosi, world No. 1 from Hungary and the reigning world champion, is another name to watch.