GWANGJU, Aug. 3 (Yonhap) -- Former President Chun Doo-hwan plans to attend an appellate court hearing on a defamation case in Gwangju next week after having failed to show up twice, his lawyer said Tuesday.

The lawyer told Yonhap News Agency by phone that the 90-year-old Chun, who served as president from 1980 to 1988, will travel to Gwangju, about 330 kilometers south of Seoul, Monday to attend his hearing at the Gwangju District Court's appellate division. 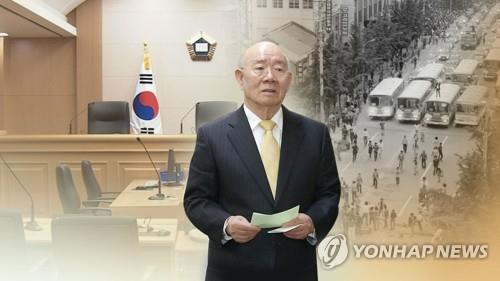 Last November, the Gwangju District Court sentenced Chun to eight months in prison, suspended for two years, on charges of defaming the late Catholic Priest Cho Pius, who testified to having witnessed Chun's troops shooting from helicopters at Gwangju's pro-democracy demonstrators. Chun was indicted in May 2018 on defamation charges after denouncing Cho as a "shameless liar" in his controversial memoir published in 2017.

According to the Criminal Procedure Act, if a defendant does not show up for trial more than twice without any justifiable reason, the court can issue a summons or make a ruling only after hearing additional opinions from the prosecution.

Ex-President Chun to attend libel trial in Gwangju on Mon. after two no-shows

Ex-President Chun to attend libel trial in Gwangju on Mon. after two no-shows