Trading volume was moderate at about 643 million shares worth some 12.3 trillion won (US$10.7 billion), with losers outnumbering gainers 581 to 270. 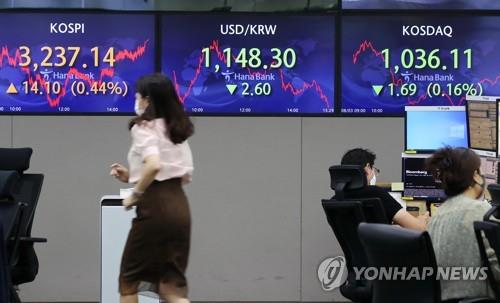 Local stocks got off to a solid start as tech heavyweights jumped on expectations for robust global demand.

But the stock index moved in and out of positive terrain throughout the session amid concerns about spiking COVID-19 cases and Chinese regulation uncertainties.

The local currency closed at 1,148.3 won against the U.S. dollar, up 2.6 won from the previous session's close.

Bond prices, which move inversely to yields, closed lower. The yield on three-year Treasurys added 0.7 basis point to 1.442 percent, and the return on the benchmark five-year government bond rose 1 basis point to 1.663 percent.